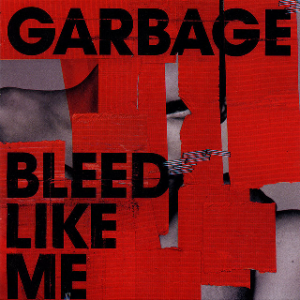 You may be unsure if you’re experiencing a misread here, associating Garbage with Moshpit on SYN, given their reputation as a top alternative-pop group of the 1990s.

However, the American band, fronted by badass Scot Shirley Manson (aka my childhood idol) had a change in sound for their fourth studio album, a complete U-turn from the previous pop outfit of Beautiful Garbage, more reminiscent of their rockier live performances.

From the first power chord of opening track Bad Boyfriend (featuring none other than Dave Grohl), it is evident that Garbage have gone heavier than the past and that they mean business.

Once again, the music world owes a debt of gratitude to Grohl, as Bleed Like Me may sound awesome, but it wasn’t an easy achievement for Garbage. Writing and recording for the album started in 2003, but the band couldn’t agree on a musical direction for the album and went on a quiet hiatus before regrouping in 2004.

Garbage drummer and acclaimed producer Butch Vig approached Grohl to drum on Bad Boyfriend, he himself being frustrated with the original drum track and from here, the band was influenced to revert to a heavier, scrappier sound for the remainder of the album.

If it weren’t for Grohl, Bleed Like Me may not have happened at all, which would have been a damn shame. Shirley Manson has such a strong voice and I thoroughly enjoy hearing it in a rawer way than previous albums, backed up by the strong riffs of guitarist Steve Marker and ultra-cool basslines from Dukes Erikson (see: intro to track 7, Sex Is Not The Enemy).

As well as going heavier, Bleed Like Me saw the band go more personal than previous go-happy pop tracks like Cherry Lips and When I Grow Up. Manson explores her deepest-rooted insecurities, body image problems and past heartbreak, evident in tracks like Bleed Like Me and Metal Heart and her unapologetic feminism through Sex Is Not The Enemy and single, Why Do You Love Me

While the album teases in some hint to the band’s more pop/electronic focussed past towards the end of the album on tracks such as such as Boys Wanna Fight (which admittedly, was a little disappointing for me as I frothed the rockier Garbage) and goes softer to show a sweetness in Manson’s voice on It’s All Over But The Crying, 2005 was the year Garbage really banged the nail on the head and found a sound worth sticking to.