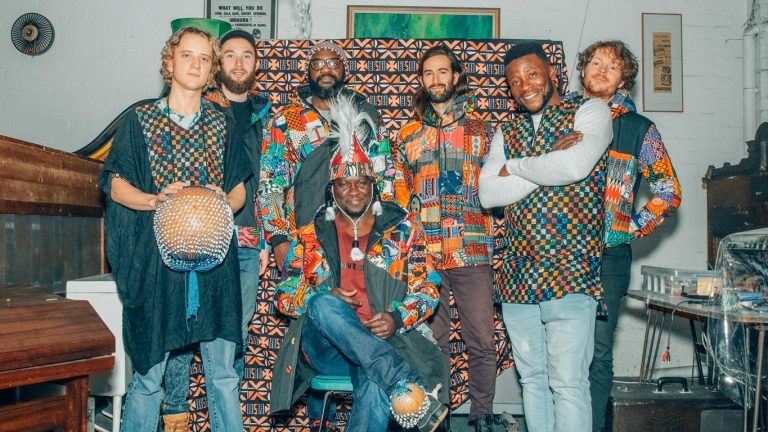 Music In Exile have brought us yet another gem in their REMIXED series with the percussive chugger that is River Yarra’s rework of Ausecuma Beats’ track Keleh.

Having already released the first EP of the series in February – a collaboration between Lil Uzu and South Sudanese star Gordon Koang – Music In Exile are once again creating something that spans both genre and culture, exemplifying the label’s “welcome those around you with open arms and an open heart” mantra.

Comprised of musicians from Cuba, Mali, the Senegambian region of West Africa, and Australia, Ausecuma Beats are a nine-piece band, led by their djembe player Boubacar Gaye. Based in Melbourne, they’re able to infuse their music with a stunning array of influences, focusing on rhythm and driven by percussion. Developing his musical ability through percussion during high school, River Yarra’s rework unsurprisingly highlights these aspects and gives them the percussion on this track, giving it the attention it deserves.

‘Keleh’ features a wobbly acid motif that is distinctly very River Yarra. It weaves in and out of the groove, which is powered by a low drum hit that lasts the song in its entirety. We hear shimmers of cymbal rolls and a quick saxophone line, providing that tippy-top level to a beautifully layered piece. The vocals, sung by Yusupha Gnum, a Wolof man from Gambia, soar over the rest of the instrumentation while still managing to entwine themselves into the timbre of the track, thanks to considered production and a clever rhythmic feel. In Gnum’s singing, he deplores how the misuse of power and the pursuit of material wealth can be the undoing of society, a lamentation that can be felt through the vocal line as it moves through the piece. On the whole, Keleh (River Yarra’s Situationist Rework) is a sonic testament to Melbourne’s music community and its cultural multiplicity.

The full River Yarra x Ausecuma Beats REMIXED EP is released on the 24th of July and is available to pre-order on Bandcamp.