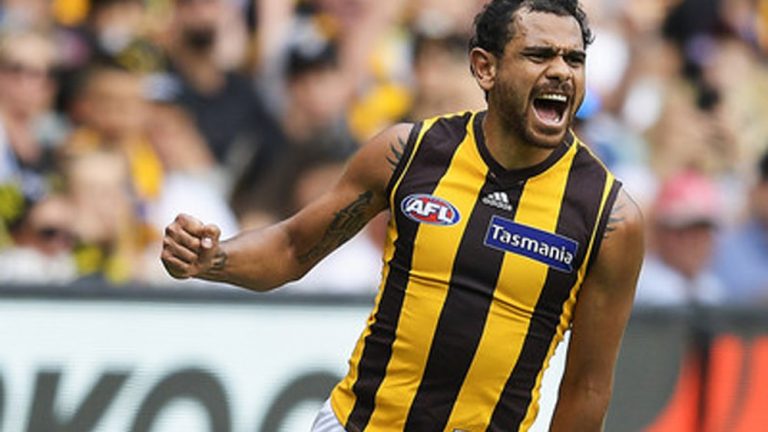 Hawthorn superstar Cyril Rioli is hanging up his footy boots.

The four-time premiership player announced today in Melbourne that he would immediately retire from the game and return home to Darwin.

Rioli, who travelled to the Tiwi Islands last month to spend time with his family, broke the sad news to his teammates at the club this morning.

“The decision to retire from football is something that I have thought long and hard about over the past 12 months,” he said in a statement.

Rioli, 28, had been on personal leave since early June, returning to Darwin due to personal reasons.

Rioli played 189 games and won four premierships with the Hawks since making his debut in 2008.

The Norm Smith medalist said it had been difficult being away from home, but thanked the club, his wife, manager and Hawks fans for their support.

What a joy & privilege it was to play alongside this legend. The things he did on the field you just had to laugh at!! Such a freak!!! All footy fans will miss this 🌟. Thanks Cyril for everything you’ve done for our great game and the @hawthornfc #besthighlightspackageever

Thankyou brother for being a champion role model and idol to a lot of us. Congrats on a stellar career, the game won’t be the same without some Cyril magic pic.twitter.com/hGSiElBtKE

The moment you realised that you were being chased by Cyril Rioli, felt like this pic.twitter.com/90sUtj9jGS

Goodwin: Cyril Rioli was one of my favourite players to watch.

Going to miss seeing you put on a show and learning off you every weekend unks! After watching you on TV and me getting drafted I am so lucky to have played against you and something that I will never forget. Thanks for all the memories Uncle Junior Boy #Idol