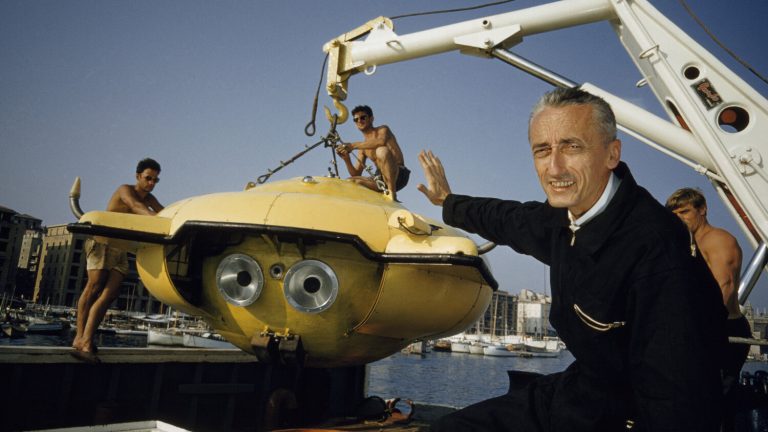 “While not ground-breaking in its account of Jacques Cousteau, Becoming Cousteau nonetheless reminds audiences of the continued significance of the iconic oceanographer and explorer.”

As the title of the film suggests, Becoming Cousteau (2021) is very much about charting how the infamous oceanographer-turned-conservationist Jacques Cousteau came to be. However, it also represents a transformation from the man that was Jacques Cousteau to the symbol of change that he stands for today — a symbol that suggests that ‘becoming Cousteau’ is something of a process that is open to all should we be curious enough to apply ourselves like the man himself.

Throughout most of Liz Garbus’ very conventional documentary approach (tracing Cousteau’s life in a linear fashion from start to finish), she doesn’t necessarily offer much in the way of new information regarding Cousteau (things that weren’t already known, aside from some never-before-seen footage), but she does structure her documentary as a process that highlights Cousteau’s own transformations. This is particularly true as Garbus uses archival footage and interviews alongside audio from Cousteau and those that knew him, as well as vocal readings from diaries.

Having first encountered a version of the renowned man with the red beanie and his minesweeper ship through Wes Anderson’s Cousteau-inspired The Life Aquatic with Steve Zissou (2004), it’s easy to see how Cousteau’s uniqueness and adventurer status lends itself to interpretation. Of course, Anderson’s interpretation with Bill Murray in the lead role carries its own meanings and complexities. But the fact that Cousteau’s life and status are something of a means to further exploration (be it on screen through interpretations or otherwise), is indicative of his significance to the world as we know it today.

Garbus captures the key moments and milestones in Cousteau’s life, but he was evidently a much more complicated man, stating at one point that “I’m not interested in analysing myself…I’m interested in the world outside me…my world inside is nothing for me”. This mentality becomes more pressing in the films second half where Cousteau’s life had experienced more tragedy (particularly following his son Phillipe’s death), and as his work had shifted from curiosity for the ocean to an understanding of his role in speaking to his experiences across the world.

The pacing in the second half of the film is noticeably more abrupt considering how the latter half of Cousteau’s life became more about conservation rather than exploration (which is not to say he wasn’t still exploring). Garbus cleverly focuses on the strain and toll that tragedy and the celebrity status had on Cousteau in the films second half — ultimately giving a deeper insight into the mistakes and regrets the oceanographer had (something that is relatively new judging by how most accounts of his life have focused on his achievements and conservationism).

Today, the name Cousteau is synonymous with change perhaps more than ever, in a world where climate change continues to threaten life, but the response is lacking to the extent needed. The Cousteau Society (established in 1972 by the man himself) continues to thrive in its endeavours to preserve our oceans and incite change through action. Garbus captures that change in mindset in Cousteau over the course of the documentary’s 90 minute runtime, where Cousteau reflects on his earlier work with disapproval (including his 1956, Palme d’Or winning feature, The Silent World).

While not ground-breaking in its account of Jacques Cousteau, Becoming Cousteau nonetheless reminds audiences of the continued significance of the iconic oceanographer and explorer. The film is ultimately an insightful examination of who Jacques Cousteau was both professionally and in his personal life (the latter of which has often escaped the public eye). Seeing as most of today’s younger generations (including yours truly) aren’t familiar with Cousteau and the importance of his work, Garbus’ documentary serves as an important reminder of how Cousteau’s legacy and efforts are as important today as ever.

Becoming Cousteau opens in select national cinemas from the 22nd of October 2021.