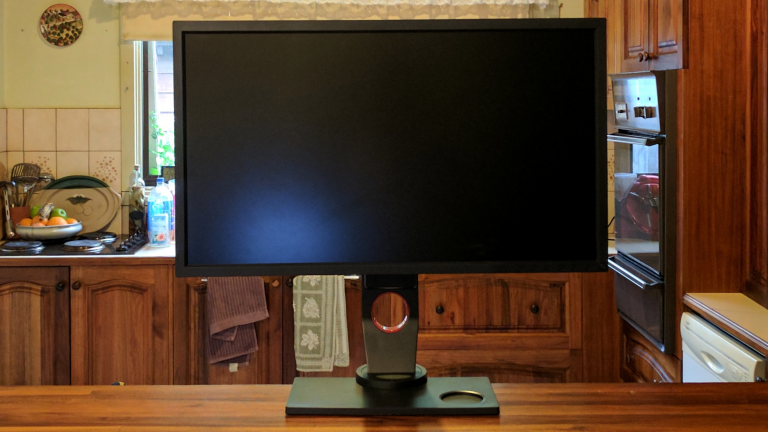 The BenQ Zowie XL2735 demonstrates the best that BenQ has to offer (in its ZOWIE range at least). Aimed towards the eSports market, this monitor attempts to appease the issues that many professionals have with their monitors, both in gaming events and in the privacy of their own home.

Design
The most prominent feature of this monitor is the included shields (also known as the “stop cheating or I’ll smack you over the back of the head” protectors). These large pieces of metal are essentially human blinders, with BenQ suggesting that it is *the* way to maintain concentration in game. In practice, I found that it made no difference to how focused I was in game. It was useful when used in a LAN party though, so that’s something.

These shields attach to a fairly minimalistic frame, with a 27″ display surrounded by small bezels and buttons on the front (thank god). The stand allows for 60 degrees of rotation and has guide tabs on the side to help reset the height of the screen to what you want (if someone else moves it). The stand also contains a handy indent for the S-Switch (which we’ll talk more about later) and the typical cable management solutions. If you prefer, there is also the option to use a 1000 x 100mm VESA mount instead of this.

S-Switch
Updated for their new series of products, the S-Switch has made a return to stardom with this monitor. Featuring three numbered buttons and a clickable scroll wheel, the small round wheel allows for easy navigation of the OSD and quick switching between display profiles. It now also has inbuilt memory, allowing for profiles to be saved on to the device and transported between various BenQ ZOWIE monitors. Whilst the transportable display profiles isn’t really relevant for regular users, the easy navigation of the OSD is definitely welcome.

Display
The XL2735 uses what appears to be a typical 144hz TN panel, however it really shines through their “Dynamic Accuracy” technology, which reduces motion blur. It’s most noticeable in arcade shooters, with games such as Overwatch and Counter-Strike: Global Offensive being actively improved through the use of this tech.

Created by BenQ, the video below demonstrates the difference:

The other main feature of this monitor is the Black eQualizer, which brightens dark areas without overexposing light areas. It really only makes sense to turn on in games such as ARMA or Battlefield, with it not really being useful in many games apart from this.

Aside from all of this, the monitor supports a max resolution of 2560 x 1440 with a 1ms response time. For the price, the panel falls a bit short, especially for non-gaming uses. Colours are washed out even with profile customisation and it’s generally an unsatisfying experience (for the price).

Gaming on this monitor is a great experience though. Utilising the 144hz refresh rate with the “DyAc” technology made playing fast-paced games such as CS:GO and Forza Horizon 3 a whole lot more immersive and fun that with other monitors. I noticed a legitimate improvement in my skills when playing CS:GO on the XL2735, particularly due to the “DyAc” allowing me to see enemies hiding in cover far easier, and without having to stop moving. It’s obvious that this type of gameplay is exactly what this monitor was designed for.

Conclusion
The BenQ Zowie XL2735 appeals to a very niche market. The features it offers are great for gamers, but are pointless for regular users. The price and somewhat average performance of the TN panel also do it no favours, however that’s besides the point.

BenQ have been very clear that they wish to focus on the experience, not the specifications of their monitors. Ultimately it’s up to the individual buyer to decide whether the features are more important to them than having a monitor that is useful for more than one thing.