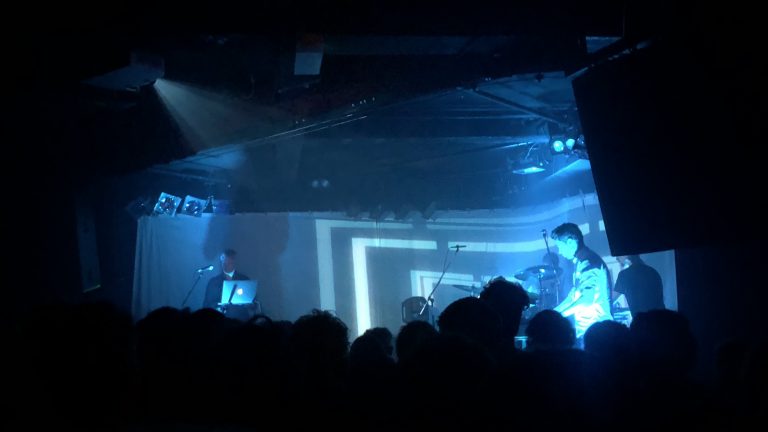 Black Cab @ The Corner, Saturday 11 May

Celebrating the ten-year anniversary of their acclaimed record Call Signs, Black Cab have come a long way sonically from their post-punk and krautrock-infused origins. Across several highly-conceptual records, Black Cab have maintained a considerable following in Melbourne with their popularity continuing to strengthen as their sound evolves. Undeniably a relentless and uncompromising live force, Black Cab delivered an incredible homecoming show to a near-sold out crowd at The Corner.

Positioned between two excellent Ara Koufax DJ slots, SaD kicked-off with an engaging performance of dark synth-driven material. With Simona Castricum on guitar and NO ZU’s Daphne Camf holding down the vocals, the duo performed a tight set of 80’s-inspired minimal wave. Transfixing the crowd early with a series of compelling unreleased tracks, the set felt like the perfect lead-in to the more club-ready electronica of Black Cab. With a superb cover of The Triffids’ ‘Raining Pleasure’ complimenting their original material, SaD delivered a truly impressive set.

The selections of Ara Koufax on the decks segued perfectly into Black Cab’s instrumental opening before diving head first into ‘Combat Boots’. With its sharp synthesiser stabs and Andrew Coates’ commanding vocal delivery, the frenetic energy of the song immediately seized the audience. Other Games of the XXI Olympiad favourites ‘Kornelia Ender’ and ‘Sexy Polizei’ continued to build the intensity of the performance, but it was the sprawling epic ‘Supermädchen’ which delivered a unanimous highlight of the night. As the robotic vocoder sounded through the room, the relatively subdued crowd began to move more freely with a few stray fists thumping to Wes Holland’s bass drum. With the chaotic arpeggio synths building and releasing into soaring chorus breaks, ‘Supermädchen’ showcased Black Cab’s sound in its most euphoric form.

While ‘Uniforms’ may be the closest they’ve ever come to a pop formula, the track is a menacing force live which maintains the dark and industrial edge of the band. The droning synth tears through the venue as the band become enveloped in projections and red light. With an impassive temperament and no respite for interaction or applause, the band deliver an experience that is both exhilarating and uncompromising. Nothing quite encapsulates the intense nature as perfectly as closer ‘Empire States’, with the 11-minute track wrapping the relentless set with tremendous force. As the siren-like synth echoes through the room, the sheer energy of ‘Empire States’ highlights Black Cab at their absolute best. Given the consolidation of their transition from guitars to electronic instrumentation, it’s a remarkable testament to the band who continue to evolve and push the boundaries of their sound.

After a brief intermission, Black Cab returned to the stage and delved into a handful of modernised cuts from Call Signs. After a brilliant rendition of ‘After the War’, it was the pulsing beat of ‘Sonnenallee’ that nearly turned the night into an 80’s Euro-goth rave. While the anniversary called for a celebration of the since-retired tracks, they felt perfectly in place alongside the dark electronic instrumentation of their recent sound. As lights and lasers danced around the venue, the night drew to a close with a fitting rendition of Joy Division’s ‘Isolation’, the band evidently a clear influence across Black Cab’s discography.
With past projects being heavily inspired by European culture and politics, Black Cab’s modern sound embodies a cold and frenzied energy that undoubtedly evokes the spirit of underground clubs in Europe. Given the sprawling nature of their releases, Black Cab are able to translate their diverse material into an immersive audio-visual live experience that feels as tight and cohesive as their recordings. With an impending album release and new tracks such as ‘Take It’ sounding incredible live, Black Cab prove once again their indisputable reputation as one of Melbourne’s best bands.