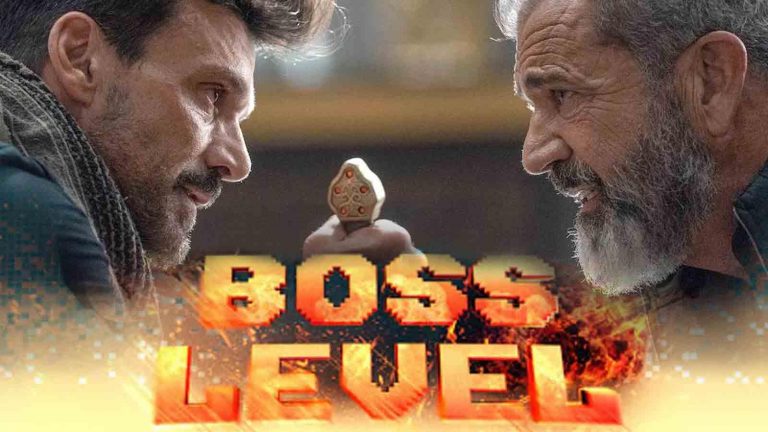 Boss Level is an action and science-fiction film directed by The A Team filmmaker Joe Carnahan. It centres around a retired special forces soldier Roy Pulver (Frank Grillo) who is forced to relive his death over and over again that sees him murdered by an ensemble of assassins in a never-ending time loop. Not knowing how or why he’s being forced to repeat the day over and over again, Roy begins to unravel the mystery surrounding his circumstances and the role both he and his ex-wife Dr Jemma Wells (Naomi Watts) must play in stopping Colonel Clive Ventor (Mel Gibson). The film’s central concept of repetition plays out like a fusion of movies such as Groundhog Day and Edge of Tomorrow, creating a film that truly embodies the essence of a videogame.

Frank Grillo solidifies his status as a leading action star. His performance as Roy borrows and builds upon the likes of Ryan Reynolds’ Deadpool to deliver a charismatic and likeable portrayal of a man who is forced to relive his death over and over again. The enigmatic Grillo manages to keep you enthralled throughout the entirety of the movie with Mel Gibson, Naomi Watts and Ken Jeong all providing compelling supporting performances. Notably, Mel Gibson breathes life into his character Colonel Clive Ventor: a maniacal, one dimensional monologue prone antagonist. His over-dramatic portrayal as Ventor is – despite lacking complexity or nuance – a fun and apt villain for the film. The film does take a step away from the barrage of violence to explore the family dynamics between Roy, his ex-wife Dr Jemma Wells (Naomi Watts) and their son Joe (Roy Grillo) with heartfelt and poignant moments between the three characters allowing the importance of family to permeate the crux of the film. 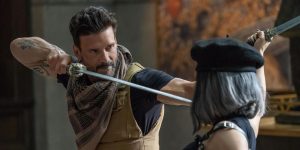 The action harkens back to that of the classic side-scrolling fighting videogames that are mentioned throughout the film, paying homage to the fighting games of the 1980s through the over the top and at times comical displays of gore and brutality. The film also plays out like a classic videogame in that there are a multitude of assassins that embody the role of a mini boss. Katana-wielding warriors and deranged men with harpoons being some of the most memorable enemies Roy faces throughout the film.

For the faint hearted, this film probably isn’t the one for you. However, the barbarity of the action juxtaposed with moments of levity and hilarity make for great entertainment, further cementing the film as being akin to the likes of Deadpool or Kill Bill. For fans of the Street Fighter and Mortal Kombat videogames, the hand-to-hand combat and sword-fighting sequences are both immersive and delightful to watch.

For a film that’s plot revolves so heavily around the concept of time, it is unfortunate that the 1 hour 40-minute runtime is such a tumultuous journey. The final act feels rushed, making for somewhat of an anti-climactic ending to what is a very enjoyable film. The science-fiction elements of the narrative are convoluted at times however, the filmmakers should be commended for the final scene as it manages to avoid a predictability that is often seen in action and video-game based films.

Boss Level captures both the joy and frustration that can be experienced when playing a classic fighting game. While the pacing of the narrative is at times turbulent, it maintains a level of enjoyment throughout its entirety. The committed performances from Grillo and the rest of the cast coupled with great choreographed action pieces makes this film a must for videogame fans and anyone who enjoys action-packed films.

Boss Level will be released in cinemas on 25 February, 2021