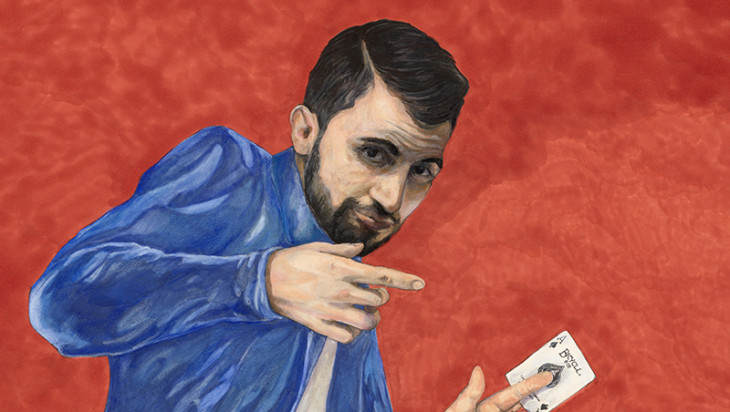 Simon Taylor is the Comedian You Need to See Right Now

For his next trick, the multitalented Simon Taylor is back at the Melbourne International Comedy Festival to serve up a cleverly mixed combo of comedy, poetry, song, dance and a bit of magic with his show, Right Now.

Right Now is a show about living in the moment but don’t worry, Taylor isn’t about spruiking some sort of superficial, inspirational, Instagram caption advice. It’s a show about learning to shrug off preconceptions and expectations we have about relationships, money, identity, masculinity and more. After his breakout ABC stand-up special, writing for The Tonight Show and his appearance in the hit Netflix series Magic for Humans, Taylor has more than a few outlandish stories from his travels on the road up his sleeve. Taylor effortlessly pulls the audience into his world of unbelievable adventures that often end in unlucky but hilarious ways, injecting moments of deep reflection along the way.

Thriving in the opportunity to engage and connect with the audience, Taylor steps away from the microphone with ease. He is undeniably quick-witted, and his talent for improvised one-liners results in, what seems like a constant roar of uncontrollable laughter. For most of us, we often think of the perfect comeback hours after an interaction when it’s too late, but I can’t imagine with his razor-sharp wit that Taylor’s ever experienced this frustrating moment. Taylor’s versatility as a performer is on full display as he picks up a guitar and improvises a musical masterpiece dedicated to one lucky audience member, and even puts on a brief dance masterclass (it’s all in the hips). These entertaining moments were a joy to watch as he had the audience in stitches while he gleefully glided across the stage. Taylor’s appeal as a comic lays in the fact that he brings so many different talents together to deliver a coherent performance; it is seriously impressive and no small feat.

If you’ve seen Simon Taylor before you’ll know that he likes to draw comparisons between the harsh reality of being a stereotypical inner north hipster with an arts degree, and his impossible dream of one day being an alpha-male bloke. He does at times tread the well-worn path of smashed avocados and inflated home property prices, however he mixes it up with improvised interactions to keep the material fresh.

In a sea of comedy festival shows, Right Now is genuinely a standout. Taylor can’t help but leave you wondering if there’s anything he can’t do, although he’d probably tell you it’s the opposite. His flair for personal storytelling dotted with deep critical introspection keeps his persona grounded and likeable. The act begins with Taylor promising to end the show with a magic trick that will not disappoint. However, what he delivers is far from just a trick, it must be seen to be believed.