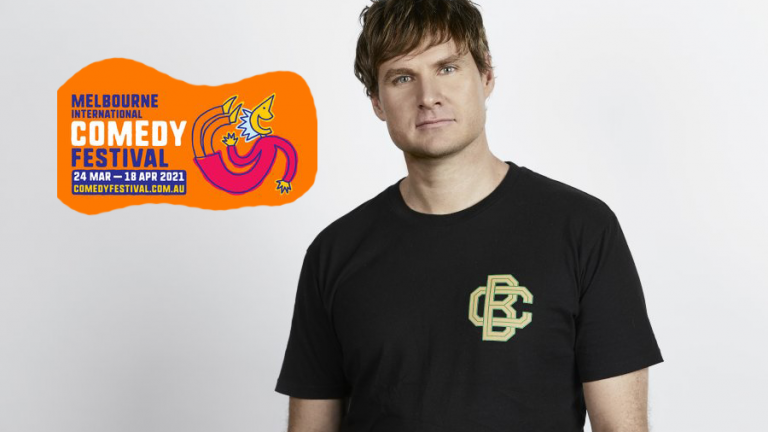 Straight away, Damien Power’s Regret Man started with a heckle. You could tell his wide array of experience as a comic when he handled it like an absolute pro. A confident performer with a strong stage presence, from the beginning my expectations were set pretty high for his set.

I won’t lie, I am a fan of dark comedy but I can understand why Damien might not be everyone’s cup of tea when it comes to this quality. A mixture of stories, observational comedy, dark and deep themes, Damien successfully took the audience on an emotional rollercoaster.

Some of the metaphors and observations Damien tried to push throughout the set – like the fact no one wants to die for their country anymore or romanticized narratives and stories are drifting away – did not feel innovative or shocking to me in any way. This might be because I’m a Gen Z who has grown up knowing that this kind of direction in history has mostly been a waste of time or maybe that those ideas to me are a fantasy of patriarchal ideologies.

This wasn’t the first and probably won’t be the last show at the MICF that featured white men over 26 making fun of ‘woke’ culture. It’s not that I don’t think this pathway of jokes can’t be funny but it just feels like a cheap jab, similar to all the COVID jokes I’ve heard and the extremely overdone Melbourne/Sydney comparisons.

In saying this, I felt relieved when he went in the direction of honest and truthful stories that felt authentic to his life story. This is where he shines. Yes, some of his personal stories might be a bit intense but they really hit the nail on the head when it comes to dark humor and relatable situations for the audience. His jokes about being the black sheep in the family as a creative was well thought out and delivered sensationally.

I’ll be honest watching this show I wasn’t amazed but I wasn’t completely disappointed. To be fair, the last year hasn’t been the best for finding comedic content but I definitely think when performing at the Melbourne Town Hall where so many young and upcoming comedians would’ve loved to perform this set felt a little reductive.

It might be that this kind of comedy is overdone or it might be that I’ve gone to see a range of shows this year, but there has to come a time when comedy about social and civil progression isn’t actually that funny. I feel that if Damien wants to connect with his younger audience and build a long-lasting successful career, it might be worth venturing out and approaching a topic he might not usually approach.

He’s got the talent, delivery and stage presence but in all honesty the writing was off. With hope, I believe there is potential there for improvement and I hope to see a more original edge to his comedy in the future.

The Melbourne International Comedy Festival runs from 24 Mar-18 Apr, 2021. You can catch Damien Power’s Regret Man from now until 18 April