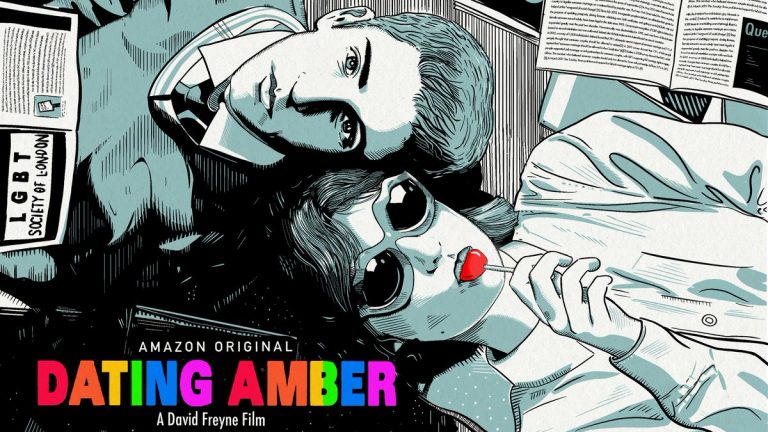 Dating Amber is the coming-out film you wish you had in your adolescence. Riddled with quick remarks and even quicker retorts, this film’s slick and effortless comedy perfectly encapsulates queer youth in ‘90s Ireland.

The film follows Eddie, a closeted teenager who is so repressed in his own denial you can see it viscerally eating away at him. His poor choices and harsh deflections make him an easy target for his homophobic tormentors. He is faced with constant questioning and mocking until he meets Amber, a social outcast and a lesbian. In a valiant effort to outsmart the bullies who torment them, the two decide to become each other’s beards (when a homosexual dates someone of the opposite gender to appeal heterosexual). However, as the intricacies of life step in, the two find their façade beginning to crack and they are forced to confront their sexualities and relationship to each other head on.

If director David Freyne is to be commended on one thing, it is his unique and spellbindingly fantastical use of lighting. The way in which he implores lighting transports you to an alternate realm all within a single scene. One key moment which really stood out was the scene where Eddie and Amber first encounter a queer bar. Escaping the constraints of their small Irish town, the two head to Dublin for a day and suddenly the entire tone changes as they see an example of Queerness which isn’t repelled or repressed. 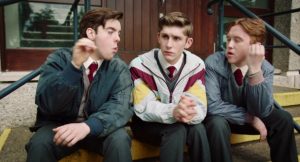 The lighting usually relies on a high key, natural or ambient lighting which adds to the film’s sense of verisimilitude. Yet once the two encounter the bar – and Freyne holds the camera on the two in a glorious mid-shot with a glowing Pride flag in the distance – the use of lighting transforms the film. Immediately Freyne announces this pivotal moment in their lives through emotive lighting that transforms each frame into a technicolour mosaic. Blends of red and blue hues welcome each frame in a stylistic decision that can only begin to mimic the emotional significance this moment has on Eddie and Amber. The sharp announcement of visual colour within the scene symbolises the emotional freedom within the space, building a fantastical and metaphorical breather for the two. This use of lighting is so intoxicatingly beautiful but also cements that this is the right path for these two characters.

Bursting with wit and sarcasm, Dating Amber lightens an otherwise serious experience through its comedic approach. The visuals on-screen act as a visual metaphor for Eddie’s journey, strengthening the films emotional impact as it becomes a visceral experience for the viewer. It is very much a film that can be lightly indulged with humour or devoured with emotional intensity. Not only does this film find that tricky balance, it does it so well you don’t even realise it.