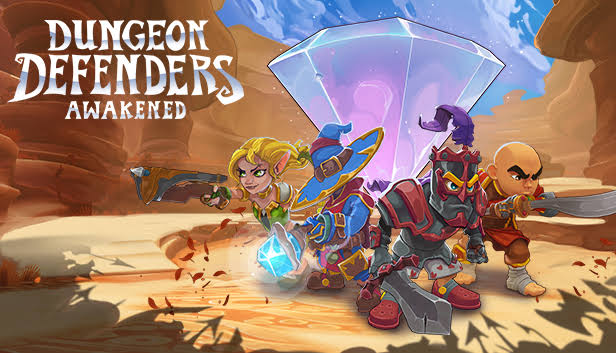 Dungeon Defenders is a 3rd person tower defense game that gives you, the player, a more challenging setting by dropping you right on the path of the enemies. While you can buy and place traps and turrets like other tower defense games, in Dungeon Defenders you can also attack the enimies yourself, with your own differing weapons and abilities from an ensemble of fantasy characters. This player enemy interaction is a lot more immersive than most tower defense games because it forces you to always be on your toes rather than laying your traps and sitting back.

Dungeon Defender Awakened is the fourth installment in the dungeon defender’s series and unlike its 3 predecessors. Dungeon Defenders Awakened has created a new art style for itself that seems to be appealing to a younger audience. With characters that I can only compare to “Chibi” fantasy characters with amazing customization such as different armour cosmetics, weapon skins, and pets that can follow you around as you play.

All though the art style is a lot more childish, the difficulty most definitely isn’t set in baby mode. When I booted up this game, I thought to myself, “yeah, I’m a gamer, I can choose the ‘massacre’ difficulty.” Wow I was so wrong. There were so many times when I would get so close to victory, I could taste it on my tongue, and just when it looked like I was in the clear the last wave would introduce a new enemy that would barrel through my traps and smash my crystal. The difficulty is such a rewarding level, with each level getting even more hardcore than the last, it makes every defeat hit harder and every win feel sweeter. With such a gratifying difficulty system I can only praise the game for its tenacity and ingenuity.

Look, unlike a lot of game critics, I do actually end up getting really far in the games I play. But with the game mode variety in this game it may take a little longer than I thought. Single player is very challenging and satisfying, with 3 acts for you to get through initially. Endless mode is Hell’s kitchen, and almost impossible to beat, no matter how many waves I beat there’s always another waiting just around the corner. And you can even browse multiplayer levels to play with friends or strangers. Each game mode has multiple waves, difficulties, beautiful level designs, and music that could keep you entertained for hours on end.

Overall Dungeon Defenders Awakened has a creative design, an ingenious difficulty threshold, and intuitive combat, it’s fun and fresh and it stands out from the meta of games that we all play. It’s not a shooter, a fighter game, or a beat-em-up. It’s something old, and yet it still feels new. It’s a game for all ages, and I couldn’t recommend it enough. Try it out!