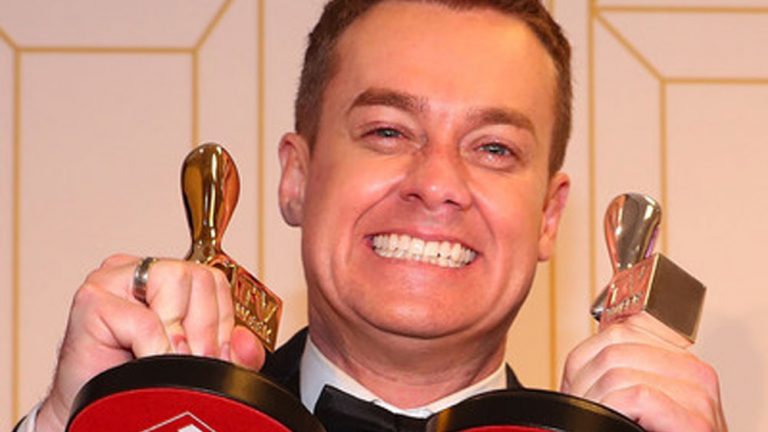 AFTER a record 22 nominations over his more than 20 years in TV, Grant Denyer has won not one, but two Logies.

“Family Feud is important, it came along for me in my life at a time where I really wasn’t quite sure if I would ever work again or if I wanted to,” he told the crowd.

How hot is my wife!? #Repost @tvweekmag ・・・ Gold Logie nominee @grantdenyer and his wife @chezzidenyer walk the red carpet at the #tvweeklogies

Denyer, who is best known for his role as the former Sunrise “weather girl”, also dedicated the award to his TV producer wife, Chezzi.

“To my beautiful wife, Chezzi. Oh my God, we did it, darlin’. We did it! We bloody did it. We are an incredible team and I want you to share in this.

“You’ve been there to hole me up when I wasn’t so great. You believed in me when I didn’t believe in myself and you made the two most beautiful girls, Sailor and Scout.”

He also won the Silver Logie for Most Popular Presenter for his work on the Feud.

The award is somewhat bittersweet for the 40-year-old, following the show’s axing last month.

Understandably, Denyer has a real soft spot for the Feud, and couldn’t resist cracking one last “Survey Says”.

‘I’ve said ‘survey says’ 30,000 times in the last four years. But for the very last time. Survey Says, thank you for making this your top answer,” he said, ending his acceptance speech.

Way to go Denyer. You. Are. Awesome!