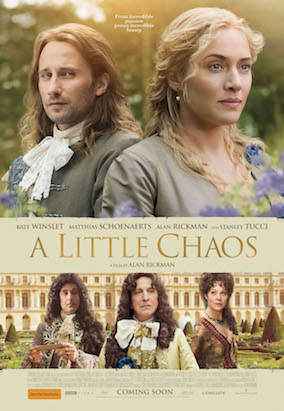 If, like me, you’re a big fan of Alan Rickman and all things British, you will probably enter A Little Chaos with pretty high expectations. It has an impressive cast, featuring Rickman (who directed and also co-wrote the screenplay), Kate Winslet, Matthias Schoenaerts, Stanley Tucci, Helen McCrory, Jennifer Ehle and Rupert Penry-Jones. The story is prime material for enchantment: Sabine de Barra (Winslet), an independently-minded landscape gardener, gets a guernsey working on an outdoor ballroom/rock waterfall in the gardens of Versailles circa the late 1600s, supervised by the handsome (despite the hair) and restrained André Le Notre (Schoenaerts). As a period romance it is enjoyable viewing, but if you’re setting the bar high you may come away disappointed.

There’s nothing hugely wrong with the film. The acting is good – Winslet passionately eccentric and Schoenaerts reservedly chivalrous, McCrory the sly femme fatale with a fall coming her way. Rickman’s Sun King is rather soft but he’s always great to watch, and Stanley Tucci (my personal favourite) is delightful as Louis’ camp brother Philippe, Duc D’Orleans. There are some touching moments, including a wonderful scene where the ladies have some alone time sympathising over loss before going up against the men in an emotional display of wit. But despite the peculiarities of the plot it felt like an old story told in an old way, and much of it sat awkwardly – the humour in the opening scene, the stylised and historically inaccurate costumes (especially Sabine’s ridiculous hat), the necessary friendship and support of Thierry Duras (Steven Waddington) to get the men working, Sabine’s overdone haunting past.

This film also sits awkwardly in the debate as to whether or not actors should put on the accent of where the film is set when a foreign language is involved (as, for example, Geoffrey Rush and Emily Watson in The Book Thief). It has been argued this practice belittles and patronsises the people of the place in question (imagine a French film set in Australia with all the actors speaking French with a heavy accent). It also comes across as very Anglo-centric in its representation of everyone speaking English, and on top of that making non-English speakers perpetually foreign in always portraying them with an accent. I’m not saying the Brits should have put on accents – judging from Penry-Jones when he introduces his long French title this would have been pretty horrific – but the film did suffer from a kind of over-Britishness. In other words – there is zero sense of place. If the characters didn’t mention the “French spirit” and what is “uniquely French”, and if you didn’t know where Versailles was, you would never guess it is set in France. Perhaps this is a symptom of becoming accustomed to the American accent in cinema (as accents are more noticeable when they are not American), but not once did the film take me to France, and I found it unsettling.

That said, there is a gripping sadness to this film, and you do feel engaged with the characters and their mammoth task. The final shot, whilst soppy, is beautiful cinematography. A Little Chaos is nothing special, but there’s no reason to write it off either – there is heart to this film, which will be appreciated by those who enjoy the genre.