FILM REVIEW: In This Corner of the World 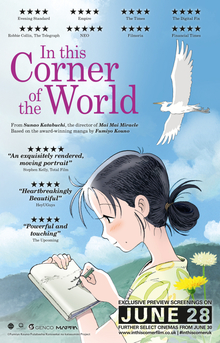 In This Corner of the World (Kono Sekai no Katasumi ni) is a Japanese film.
Digital screener copy provided by Umbrella Entertainment.
Words by Stefan Bradley.

In This Corner of the World may appear to be a lighthearted cartoon through its visual style, the youth of its main character and its basic plot at the beginning, but this is in fact a tragic story for adults. Children may also be bored as it’s quite long and events unfold very slowly.

The star is Suzu Urano, a charming young girl who enjoys drawing. In 1944 she moves to a town called Kure, near Hiroshima, where she marries a clerk named Shusaku Hojo and lives with his family. Of course, this is set during the Second World War during the US air raids on Japan, culminating in the atomic bombs dropped on Hiroshima and Nagasaki. The film isn’t so much a war film, but instead a drama set during the war. As someone who visited Hiroshima this year and saw the memorials, I was expecting to love this movie. Don’t get me wrong, I did like it, just didn’t love it.

The movie is a very slow burn, and in my mind doesn’t justify the running time of 130 minutes. The major events don’t occur until about 80 mins in, and until then, audiences are watching the daily lives of these characters deal with domestic issues. These big occurrences happen so late that the film does not give the characters the time they deserve to process the events and develop as individuals. It seems that the film’s purpose is to show how war affects regular people, which I appreciate, but this didn’t necessarily translate into a great movie for me.

However, I’m sure some viewers will absolutely appreciate the little things more than I did. The animation is gorgeous, and much what you see is based on reality. Some of the plot lines are based on real-life accounts, and Hiroshima before the atomic bomb hit is recreated using old documents, photos and memories, which makes it more poignant. The soundtrack is also beautiful. Its best moments creates opposite feelings at time. You may feel grief, then overcome with joy; pessimism, then hope.

Go see In This Corner of the World. I personally had a few issues with its pacing, but I’m sure many will shed a tear while watching it.