Film Review – Dior and I 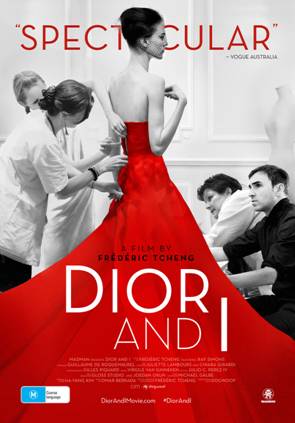 If you checked out the NGV’s recent Jean-Paul Gaultier exhibition, you would probably have been pretty entranced by the beauty, absurdity and sheer workmanship of haute couture. Dior and I takes the discovery of the high fashion world a step further by introducing the audience to the atelier and the people behind the actual making of the clothes at Christian Dior.

The film’s main subject is Belgian Raf Simons, who took over as creative director at Dior in 2012 and had six weeks to launch his first haute couture collection, when normally, the Italian head of tailoring Fulvio Rigoni informs us, it takes 4-6 months. It is therefore a very stressful time for the serious and intense Simons and the Dior house, particularly the heads of the two ateliers, the cheery Monique Bailly (dresses) and the anxious Florence Chehet (suits). Simons’ charmingly boyish right-hand man Pieter Mulier holds it all together, liaising seamlessly (pun intended) between various departments and personalities, as everyone throws around the word “sublime” and staff print off exigent designs without testing them to save time and spend a sleepless night picking beads off a dress to be reworked. It is this that makes the film so interesting – it is not just about Simons, but about the whole house of Dior.

The structure of the documentary is unusual, as it alternates between scenes of Simons’ team and of narrated sections of Dior’s autobiography, in which he talks about his two selves: that of the man and that of the fashion house. Tcheng positions us to see Dior’s influence everywhere; there is even talk of a ghost. Parallels are made between Simons and Dior, only to be smashed in a very amusing scene in which Simons said he found the autobiography so weird he had to stop reading it. We live in different times.

Tcheng stays completely out of it – he is not a character and it is barely acknowledged a film crew is always hanging around (interestingly Simons tells the camera he doesn’t like being photographed). This means we can study more closely the people who make ideas come to fruition, at the whim of one man. You don’t think they’re going to make it with all the dresses still laid flat as templates on the table just days before the show, but they do. The show, clearly put on to extravagant expense (Simons seems removed from this part of things – he is all about the vision, no matter what the cost in monetary or labour terms), is stunning. Even if you are not a fan of the clothes themselves (as paradoxical as that sounds), the event is beautiful. Simons, after spilling some nervous tears as he chewed gum on a balcony, runs out to a standing ovation, whilst the heads of atelier and his right-hand man watch below and cheer in front of a tiny screen. They are well and truly behind the scenes, but we know just how much this show is also theirs.

There is beauty, there is humour, there is tension and there are clothes. This is a fascinating documentary I recommend to anyone with even the slightest interest in fashion.