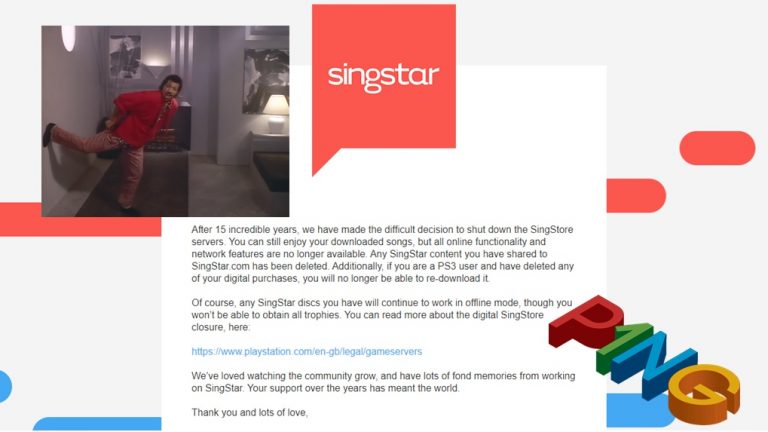 A local video game and karaoke enthusiast is feeling lost and isolated after Sony Interactive Entertainment ceased support of its SingStore online service.

Jamie Kerrigan, age 26 of Airport West, says that the service’s closure means the loss of one of the greatest pleasures in their life.

“SingStore was my jam, my bread and my butter,” Jamie told P1NG.

“It allowed me to consume and sing the music of Macy Gray, Supergrass and The Cardigans in the comfort of my own home.

“Seriously, who needs nightclubs when you have these bangers!”

SingStore was launched in 2007 to complement the party game SingStar on PlayStation 3.

As part of the service, users were able to share content online and download extra songs for a small payment – a precursor to what are now called microtransactions.

Jamie had been devotedly playing SingStar for twelve years prior but, with online support having ended, saw no reason to continue investing in the game.

The catalyst for this decision came when Jamie beat their high-score for “Beep” by the Pussycat Dolls for the sixth time in a row.

“With no online functionality, the gameplay gets pretty repetitive,” Jamie says.

“Where’s the fun in constantly breaking your own records?”

Yet for Jamie, the inability to download new tracks is the saddest part about support for SingStore discontinuing.

“It’s sad because I was really looking forward to downloading the Lionel Ritchie songpack,” Jamie explains.

“Now where am I going to get my tunes? Spotify?! I don’t think so!”

Now that SingStar and the SingStore are no longer part of Jamie’s life, the avid gamer has reached peak loneliness and is hoping to find a new outlet to fill the void.

“I hear there are karaoke bars in Melbourne,” Jamie says.

“Do you think they’ll let me sing ‘MacArthur Park’ by Richard Harris?”

P1NG contacted several karaoke bars to ask this very question, and their response was unanimous: “No.”