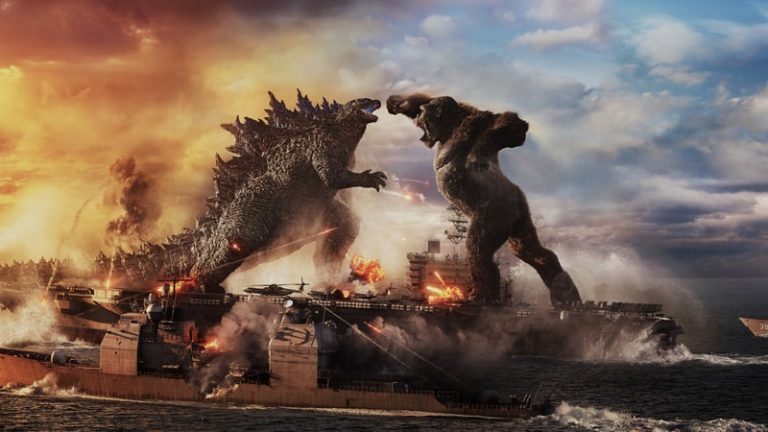 “MonsterVerse finally has a film that, for the most part, feels like it’s about the monsters”

High concept monster films all share the same problems: they spend too much time with one-dimensional human characters, their plots go astray, and there’s not enough monster for your buck. In director Adam Wingard’s Godzilla vs. Kong, we still experience some of those first two problems, but there’s no shortage of monster packed action. In fact, by taking two of the most iconic monsters in cinemas history and cramming them into a shared space on the screen, Wingard has actually made a film worthy of the Kaiju/monster genre, and it makes for an entertaining two hours at the cinema.

The events of the film take place post Kong: Skull Island (2017) and Godzilla: King of the Monsters (2019) as Godzilla is awoken from his slumber by a strange energy emitting from, you guessed it, human activity. As the monster brings unease following a three year hiatus, APEX industries CEO, Walter Simmons (Demian Bichir), tasks Dr. Nathan Lind (Alexander Skarsgard) with finding a stronger source of power emanating from deep in the Earth to better understand these titans and where they come from. On the other spectrum is Kong, who finds himself disgruntled and encased (literally) on Skull Island as Dr. Ilene Andrews (Rebecca Hall) tries to figure out a more lasting solution for him. What follows is Lind’s suggestion to use Kong to lead a search party into the Earth’s centre where he can help them track this source of energy, and in the process find himself returned to his long lost homeland.

There are a lot of plot holes that emerge from this expedition, but its main purpose in the wider narrative of the film is to have Godzilla and Kong lock horns — and that is exactly what happens. The battle sequences in the film are quite frankly some of the crispest on the big screen and they do justice to the films title. From a battle out in the ocean to your classic city destruction sequence, there’s no shortage of Godzilla and Kong. When these sequences do arrive, the monsters themselves look remarkable, particularly Kong and the attention that was given to his fur both when it is dry, wet, and covered in snow. Wingard has definitely found his groove on the action side of things for this film and it comes as a welcome change for him following his long spell in the horror genre. There are evident callbacks to the Kaiju films of the 80’s particularly in the vibrant colour scheme of the final city battle.

Jia and Kong in Godzilla vs. Kong

It feels as though the incorporation of the two monsters was able to cut out most of the tedious filler that comes with the human characters, though some of it did seep in there. For instance, the whole ‘exposing APEX’ storyline involving Madison Russell (Millie Bobby Brown), Josh Valentine (Julian Dennison), and Bernie Hayes (Brian Tyree Henry) seemed intent on explaining complex plot points in a simple way or just serving as a narrative thread that we could cutaway to every once in a while. If one recalls Godzilla: King of the Monsters, there was no shortage of dispensable characters and drab dialogue. The title, Godzilla vs. Kong, doesn’t sell the film as something that will focus on the injustices of tech corporations and what happens behind closed doors — there’s plenty of films like that (see Jurassic Park series or Robocop). Rather, it’s about a rivalry that stems generations with the film hinting at the history behind Godzilla and Kong’s haste for one another. Sure, the operations at APEX do play a part in the films action induced third act, however I would have loved to gain a greater sense of the lore behind the Godzilla and Kong rivalry as opposed to the attention given to human error and naivety when it comes to dealing with forces beyond our control.

Fortunately for Godzilla vs. Kong, the absence of dialogue when these two behemoths are on screen makes for a more engaging experience in that glorious CGI than if it had been the other way around. When it comes to the visual effects, this is a film that relies heavily on them and it makes those aforementioned sequences quite riveting at times. With a budget of $160—$200 million, there is no surprise in that regard. What is even more remarkable is the soundscape of the film which will leave your eardrums in an oddly satisfying disarray. From the long silences in the lead up to an act, to the sudden screams and echoes of the act itself, the emphasis on the vocality of the monsters packs a punch and helps provide a more visceral experience.

Godzilla and Kong are the centrepieces of this film and that’s what makes it work. Sure the side characters and the loose plotting feels like space that could have seen more monster action, but at least this film is Godzilla and Kong’s film, even if mankind is the real enemy here. Legendary Entertainment’s MonsterVerse finally has a film that, for the most part, feels like it’s about the monsters.

Godzilla vs. Kong opens nationally today, the 25th of March 2021