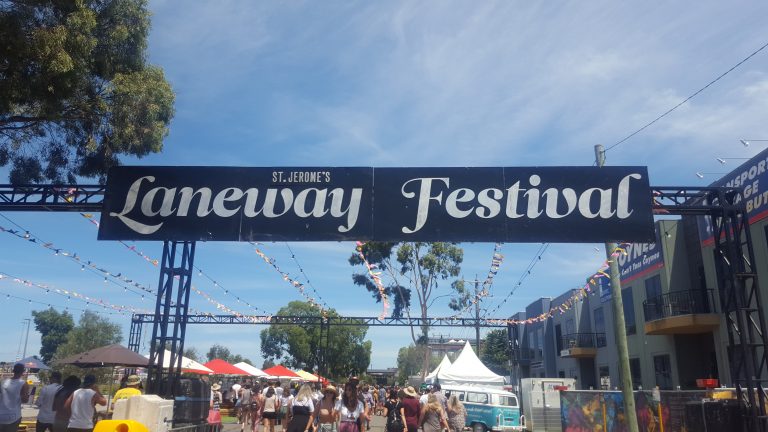 When St Jerome’s Laneway Festival kicked off more than a decade ago, in a small Melbourne laneway with 1,400 punters in tow, it’s clear they didn’t expect just how much their little idea would grow. Now making it’s home in Footscray — where it’s been for the last seven years — a crowd more than ten times that original flock may be forcing organisers to think pretty hard about their next instalment.

Logistics aside, Laneway Festival know how to put on a show and do it right. A quick skim down the set times caused many problems — like how can a person be split into three different people? With the ever-increasing controversies surrounding this Summer’s festival season, it would be fair for people to feel less enthusiastic about live music, but right from the outset it was clear Laneway were trying to do something different.

The overall feeling throughout the day was of joy and respect, and you could feel both in bucketloads. The one phrase heard more than “How good was that set?” was “Respect each other.” And that was a glorious sentiment to base your day on.

Now to the music though, and boy-oh-boy did St Jerome deliver. Shoutout to you St Jerome. 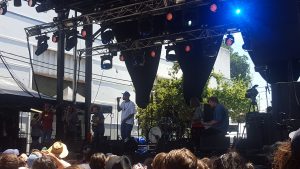 ld are an absolute force. Their nu-jazz hip hop fusion, with hints of rock and electronica, proved the perfect way to warm into the afternoon. The seven-piece assault, including a trio of horns and an infectiously slick frontman, had the crowd on their side immediately. Moving effortlessly between up tempo party jams and silky horn solos with ease, it was cool as heck, a little bit sexy and a damn good time. 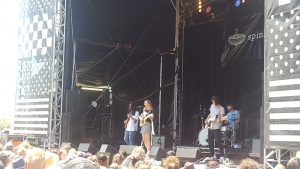 There was a different mood in the air at Julia Jacklin’s stage, with punters lounging in the sun, soaking in her sombre, soft ballads. Jacklin is an utterly captivating performer, softly spoken and earnest in her delivery, she had her audience swept into almost-silence. Whether she was performing her indie-folk tunes with her band (the quintessential Pool Party and cover of The Strokes’ Someday the big winners) or solo with only her guitar on LA Dream, Jacklin made sure you were paying attention.

The breakthrough of Camp Cope has been glorious to watch, and the crowd that welcomed the Georgia Maq-led trio to their stage was testament to that growth. Playing to a career best crowd, the band took it in their stride, powering through their set in magnificent form. While everyone else has watched their star rise, it was clear the band themselves haven’t bought into their own popularity, their genuine gratefulness and delight at the crowd size, and that everyone was respecting each other’s space, made their set even more enjoyable. “Have a good afternoon….and wear sunscreen” was the perfect closing line to a powerful performance. 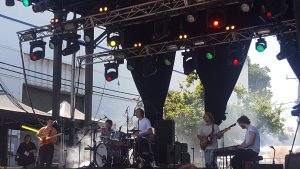 (onstage now a six-piece) brought their breezy, dreamy jams and it was utterly charming. Playing cuts from their gorgeous debut Light Upon The Lake, as well as covers of Bob Dylan’s Tonight I’ll Be Staying Here With You and NRBQ’s Magnet, tight playing intermixed with playful banter made then an underrated but successful choice. With twinkling keys, smooth trumpet and a drum-playing vocalist, it was hard not to enjoy what Whitney was throwing down. 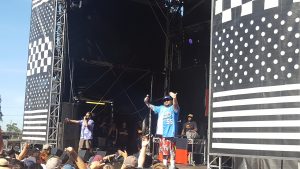 When A.B. Original start up, you know you’re going to have a good time. Trials and Briggs have incredible chemistry, they were as energetic as they were unapologetic, mixing serious social commentary with humour and charisma — because they know the most effective way to get a message across is to bring people together. As expected, January 26 was huge, and injected with the humour of their ‘million flag patriot’, the duo are ensuring their message is shared with an attentive and enthusiastic audience. 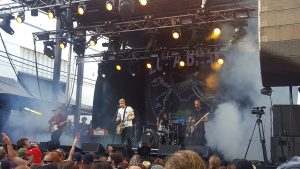 e known for being the happiest dudes going around, and there was nothing that could wipe the smiles off their faces. Not even the lack of working microphones that welcomed them to the stage could lower the mood, and when vocals finally kicked in and Luca Brasi kicked into Aeroplane, the reception from the crowd was that much bigger. The moshpit was lively, some eager punters at the front were given what they wanted in a performance of Paul Kelly’s How To Make Gravy and the band punched out every last ounce of energy they had. Satisfaction guaranteed. 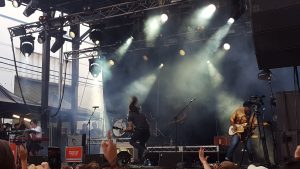 Right from the opening notes Gang Of Youths had the crowd under their spell. Dave Le’aupepe is the quintessential frontman and here he brought something magical to this small, suburban street. There were goosebumps galore, and probably some tears, the crowd taking every opportunity to sing the band’s heart wrenching lyrics back as loud as possible. Le’aupepe strutted, danced and rocked across the stage, giving tracks like Strange Diseases, Vital Signs and clear favourite Magnolia new life.

Glass Animals used the newly arrived darkness to their full advantage, bathing the stage and the crowd in a rainbow of coloured lights, leading a non-stop dance party. Vocalist Dave Bayley led the way, using every bit of energy the crowd had left, while also spending all of his own. Together, the Brits took their catchy, indie rock tracks and transformed them into something bigger. There were singalongs galore, a whole lot of smoke and even a pair of pineapples to top it all off.

While most punters were over at the Very West Stage soaking in what Tame Impala was throwing down, those who wanted something a little more chilled out strolled over to catch Jagwar Ma. The Sydney trio’s glistening, pop tracks took on a new life in the live setting, somehow sounding bigger and more spacious, stretched out and warped into new shapes, every moment taking more room to breathe. Sometimes their sound was dark, echoing off-kilter vocals barely heard in the open space, at other times Jagwar Ma offered beats and slick grooves, forcing the crowd into waves of carefree dancing. As the set went on, and the crowd grew in size, it was clear this was exactly the right way to end the festival day.

After another successful year, the heads behind Laneway definitely have some big decisions to make over the next 12 months. Will they become the next big powerhouse and fill the shoes of festivals past? Or will they go back to their roots, of the tiny Melbourne laneways they once occupied? No matter the case, as long as they keep bringing together such incredible talent the punters will continue to show up. 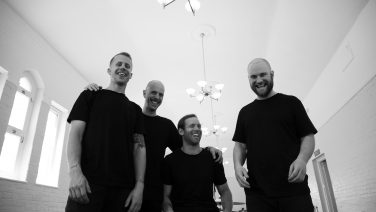 Interview with Luca Brasi - The Hoist 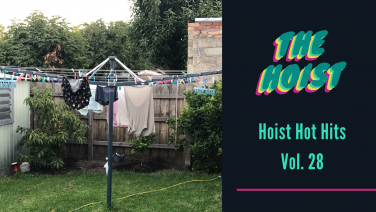 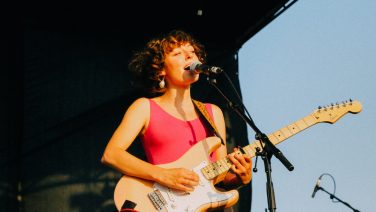