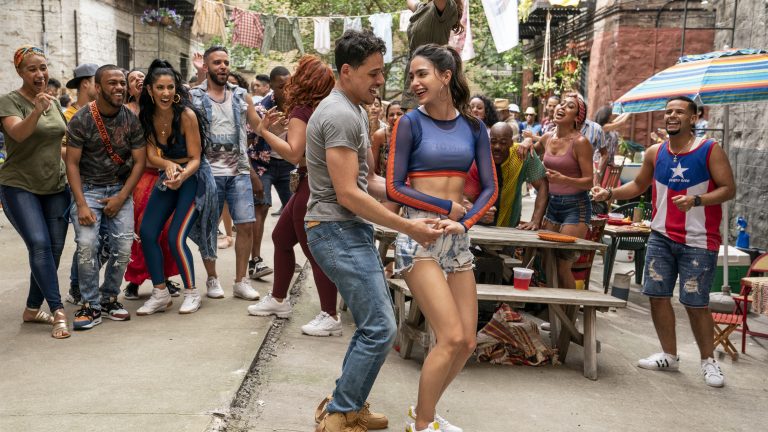 Whatever your thoughts may be on Lin-Manuel Miranda, there’s no denying that the film adaptation of his first major Broadway musical of the same name, In The Heights, is one of the most enjoyable experiences to be had at the cinema in 2021. With Jon M. Chu (Crazy Rich Asians, Now You See Me 2) there to guide the film from the directors seat, In The Heights is a musical drama that is filled to the brim with charisma and spectacle — aspects that can almost be expected from Chu at this point. But the film is also a mature representation of community and place that has a universal appeal, and one that speaks and stretches out to the social climate of the now.

It is through the Latino community that we’re brought into, and makes sense of, this specific world of Washington Heights. Specifically, our protagonist Usnavi (Anthony Ramos) introduces us to this vibrant world through an exquisite opening sequence and item number that both establishes and sets the tone for the rest of the film. Usnavi is essentially a corner shop owner who plans to return to the Dominican Republic to revitalise his father’s beach bar. There are also several other characters that breathe life into this world including Vanessa (Melissa Barrera) who is trying to break into the fashion industry while the likes of Usnavi and others from the ‘block’ vie for her attention; Nina (Leslie Grace), the academic prodigy of the block who returns from a stint at Stanford after some negative experiences; and many more unique personalities.

The central characters are all almost looking for a reason to leave the block either due to better prospects elsewhere, or a longing for home. It’s a theme that many immigrants will know all too well when coming to a place that feels like everything but home. What ensues is a large and dynamic musical akin to The Umbrellas Of Cherbourg (1964) in its ambitions, but filled with the staples of Latino culture and the pizazz that comes with it.

The crux of the film though, is about unity and connection and how people manage adversity through their shared experience and the tight knit bonds they form with their community. Chu frames this experience through the characters interactions with one another and the spontaneous breakaways to singing and dancing. There is a sense of camaraderie that these interactions and breakaways bring, but they’re never dull or out of place like with most musicals as, here they always seem to flow nicely and work towards a greater point.

Still from In The Heights

Essentially, what Chu has managed to masterfully do is introduce a looming blackout of sorts to build the perfect plot and an end point for the characters. Much like Spike Lee’s Do The Right Thing (1989) — which also happens to revolve around a block and a close community — Chu uses the heat and the rising temperature to create tension which fizzles into all other aspects of the film. For instance, the action intensifies, the soundtrack gets rowdier and rises to a crescendo, the characters become more anxious, and the various musical numbers become more audacious (as exemplified by the odd and intense editing, the emphasis on mid shots where other musical numbers would incorporate more wide shots etc.). What this blackout basically does is provide the audience with an un-restricted narration that gives us more knowledge than the characters, and Chu gradually intensifies the action taking place through the simple inclusion of the blackout which elevates those aforementioned technical and story elements.

It helps that the film revolves around the Latino community as the glitz and glamour of fiestas balances the intensity that is brewing, but the sentiment behind the intensity (to show the effects of gentrification and discrimination) never gets lost. For instance, while we as the audience are aware that a blackout will happen, the exoticism of Latino culture and our investment in this on-screen community almost diverts our attention from the inevitable (until we are reminded of its presence through smaller title cards). The effect here is that we almost feel a part of this Washington Heights neighbourhood or ‘block’ and like the characters, we forget our worries (and their eventual worries) if for a moment, by learning the importance of togetherness and unity. In this sense, the representation of the Latino community and the cast at its forefront never gives you the impression that this specific world is also an exclusive one. While this community is aware of the adversity and challenges that face them, they also stick to their roots and that togetherness that keeps them going, and as an audience member, you never feel like you couldn’t belong to that community as well — regardless of the problems they face.

Seeing a genre that was once churning out success after success in the golden days of Hollywood be revitalised whilst still offering a unique experience is a welcome sight in 2021. It is for this reason that In The Heights is the feel good movie of 2021, if not for its fun and loving approach to the musical genre, then definitely for its release during a time where togetherness and community has never felt so distant.

In The Heights opens nationally from the 24th of June 2021