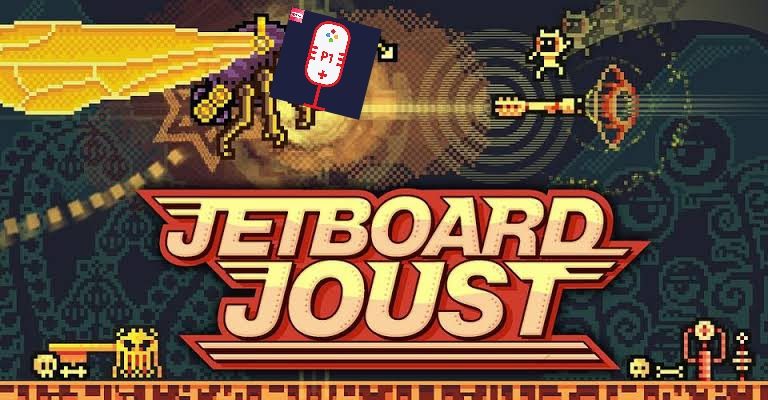 Unless you have been living under the biggest rock in existence, this year has been exhausting. It can be hard to turn away from such an overwhelming world when it is constantly demanding attention. Luckily, there is Jetboard Joust; an arcade, side-scrolling shoot ‘em up that directs all your concentration to killing aliens and saving tiny little people.

In terms of story, there really isn’t one. At least not one that is explicitly shown in the game. Rather the developers opt to tell the players they must “defeat a race of evil aliens…intent on abducting innocent civilians” in the game description on Steam. Nothing would have been lost if that were shown at the beginning of the game. It is going for that arcade feel were the narrative is implied like in Space Invaders or Defender. However, this is not made for arcade machines’ limited memory capacity. It can include purpose for the character because it is computers today have the space. It fails to utilise the liberties on offer to get across its basic story.

Thankfully, that is only minor and also the only downside to an incredibly constructed game.

Conceptually, it is extremely straightforward. After arriving on an unwelcoming planet, aliens will begin to spawn. Defeat them all with various unlockable weaponry. Once dead, you can spawn the boss to access the treasure chamber or immediately head towards the next planet. You decide which planet to travel to and the map shows what reward is available there. This is where the strategy comes in. Deciding between an armour upgrade or extra weapon could be the difference between surviving the next planet or not. With five different worlds, it is important to make sure you are able to tackle whatever approaches because once you die, you have to go start again.

The levels are short but action packed forcing you to rush across the planet trying to save civilians from abduction. While it sounds gimmicky, it is in your best interests to stop them. If the alien completes an abduction, they will become more powerful and difficult to kill. Saving them all also awards bonus points and money. Bosses have multiple stages which require different tactics to take them down. It feels truly gratifying when they finally explode. With over thirty weapons to unlock and upgrade on top of the over fifty enemies to destroy, this has tons of replay value. Each element has been thought through and is there for a reason. Its construction is deceptively simple but full of intelligent ideas that are brilliantly executed.

Graphics look the same as any pixel game however, there are details that separate it from its predecessors. While the mountains and foliage in the background never change, randomised colouring makes the scenery vibrant. Despite each planet looking almost exactly the same it never feels that way. The main character, enemies and especially the final bosses are rendered beautifully. When you crash down to the surface, after being in the air, the planet shakes. The front of the jetboard even changes to what gun is equipped. All of that attention to detail makes playing more enjoyable.

Audio is put to the same standard as the impressive visuals. To keep you on your toes, the music adds extra tension and panic. Sound effects are utilised extremely well. They alert you when an abduction is taking place, ammo has dropped or the level is complete. While neither of these elements are obvious, without them the game would not work as well as it does.

An unexpected yet welcome experience, Jetboard Joust is the perfect game to have downloaded at all times. Its simplicity makes it easy to pick up but difficult to master. The arcade style mixed with roguelike elements gives it plenty of replay value. The pixel graphics are gorgeous and never get old. If you just need ten minutes to take your mind off literally anything, this is the game to boot up. However, don’t be surprised when you check the time and hours have passed.