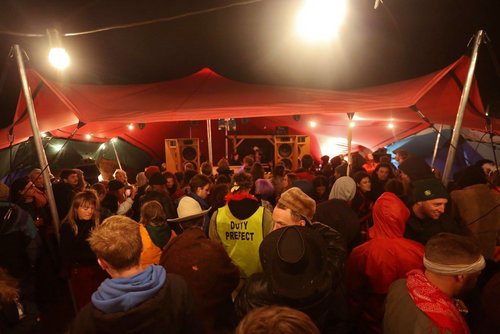 Hopkins Creek 2018  was Australiana at its best; a tribute to mother-nature, great music and even better mates.

“How many people can say they’ve been to a music festival inside a crater?,” asked my friend Leo as we stood in the center of a large grassy basin formed by ancient Australian volcanos. The harsh winds that had flattened our tents had drawn pictures with the dark clouds above our heads. Zeitgeist Freedom Energy Exchange tangled synths with African drums in the distance. We were the kind of dirty you don’t really ever get living in Melbourne–covered in dust, sweat and smiles.

Last year the event fell on the weekend of an extreme weather warning in Victoria. The conditions weren’t as bad as expected, but they certainly weren’t ideal for camping on a hill. If punters weren’t dancing they were shivering.  The weather, nor the festival being jammed between two of the biggest events on Victorian festival circuit – Strawberry Fields and Meredith Music Festival – could harsh the Hopkins hype. It completely sold out. A friend of the organisers told me they believed around 80% of punters to be first-time attenders. Pretty impressive stuff from a festival that began 3 years ago as the brain-child of a few kids from Ballarat.

Nature’s performance this year round solidified extreme weather as part of the Hopkins experience. Friday night saw totally clear skies and bright stars in the sky. A sparkling reminder the Southern Cross is more than just a tattoo your friend’s weird older brother got in Bali. The day time left shoulders blistered by the sun and lips chapped by the wind. A miniature tornado tore through the camp site early Saturday afternoon. Annoying for the people whose tents got ripped from the ground but a pretty awesome to watch.

There were three main areas for grooving; the Main Stage, Barry’s Bait-shop and Little Morocco. Most of the festivals big acts played at the main stage. Acts like Canada’s Ciel, Japan’s Mitsuki and homegrown Fantastic Man took advantage of the stages fierce sound system. I was at this stage as the first drop of rain glistened the stage’s roof on Saturday afternoon. I was listening to the events Welcome to Country. It had themes of community and belonging. It left me feeling like melted chocolate on the inside. The tarp was eventually completely destroyed by the wind. Despite this, a dedicated few embraced the mud and boogied well into the night.

More than a few times, I escaped to a dimly lit tent where the smell of much-better-than Coles-brand herbal tea danced with ambient psychedelic tunes. Due to the blood red colour of the tent and the harsh Australian sun, it felt like Morocco on the inside during the day. A great place to sweat out toxins, read a book and get prepared for whatever followed. It was also a great place to escape the noise and recharge your batteries when the main stage got to be too much. I’ll be keeping names Dreems and Norachi in my back-pocket for the next time I try to find inner-peace.

Both years I’ve attended, the small licensed bars have been the highlight of my weekend. This year it was known as Barry’s Bait-shop and featured Australian DJ’s dropping classic after classic. I spent most of one afternoon on the couch people watching when these two Sydney girls dressed in sailors outfits – International Stunning Bitches – dropped Jamelia’s ‘Superstar’. The Sing-star throw-back finally got me back onto my feet and dancing. In true Australian fashion, Barry’s Bait-shop never took itself too seriously. An act listed only on the set-list as Bait-shop Boys proved this by mixing Groove Armada and Fatboy Slim’s ‘I see you baby’ into Norman Greenbaum’s ‘Spirit in the Sky’. “We’re not here to f*** spiders,” they announced in a monotone Australian mumble that would make Will Wagner run for his money.

Although not as solid as the major festivals, the events merchandising, organisation and set up felt far more legitimate than last year. From the moment the branded wrist band was secured around my wrist I could tell a few serious upgrades had been made. It was hard to believe this was seriously a grass-roots regional event. That was until I met one of the organisers’ sisters who had spent the morning showing her mum around the festival—apparently, she’s pretty bloody impressed.

The festival organisers clearly have some major love for their home environment. Hopkins was almost entirely plastic-free with vendors plating up your meal on mis-matched ceramic plates; guests washed them by hand at a make-shift kitchen sink. The Hopkins organisers also donate money to an organisation that aims to prevent VicRoads from destroying sacred Djap Wurrung birthing trees in the Ararat area. This enthusiasm for respecting the land was matched by punters who left the area impressively clean considering the wind conditions.

Once again, Hopkins Creek delivered a stellar weekend in less than stellar conditions. The team’s dedication to environment, community and authenticity made festival-goers feel like they were a part of something really cool; with an energy that more than made up for the weather and the dodgy toilets that seemed perpetually full of munt.