Interview: ‘All Shook Up’ 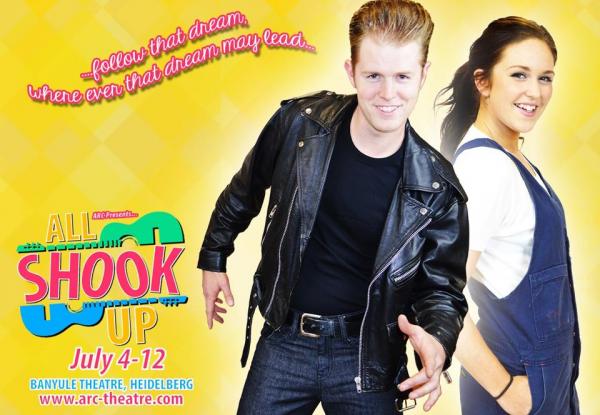 ALL SHOOK UP is a jukebox musical comedy inspired by the songs of the King of Rock and Roll: Elvis Presley. Set in a small town in Middle America in the 1950s, the quiet community is turned on its head when a leather-jacketed roustabout rides into town determined to shake up the citizens with his guitar-playing, hip-swivelling and irresistible rock’n’roll music.With a hilarious plot inspired by William Shakespeare’sTwelfth Night, and featuring countless Elvis classics including Blue Suede Shoes, Jailhouse Rock and Can’t Help Fallinin Love, ALL SHOOK UP promises to be an unforgettable night of musical comedy and infectious rock’n’roll music. ARC Theatre President Nathan Slevin says that the decision to bring All Shook Up’s energetic atmosphere to life at Banyule Theatre was an easy one, presenting audience members with a fun adventure through a musical world set in 1950s America with iconic music and a classic Shakespearean-inspired story.

Scott from Art Smitten had a chat to comittee memeber and actress Verity Brown about the production.