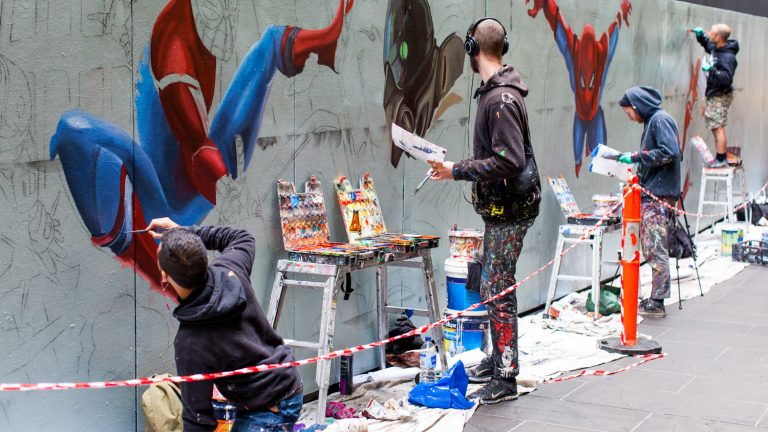 CAROLINE: Congratulations on your big commission!

CAROLINE: Can you tell us how you got the gig?

SAM: I work part time at Apparition Media, and I’m an artist and a designer there as well. Tyson (Hunter), one of the founders, he pitched me as an artist to do a custom design for the Spider-Man mural. Sony likes my work so they said “we’ll have you do the artwork for us”.

CAROLINE: Spider-Man is such an iconic Marvel character. Were you briefed to stay true to the original, or were you allowed to have creative freedom in the design?

SAM: They were pretty strict on keeping it to the new Marvel cinematic universe design because they wanted it to be set apart from the classic comic book costumes and also to keep it apart from the past Spider-Man franchises that have been done before.

CAROLINE: And how is this reflected in the art, in the mural itself?

CAROLINE: And Knox Lane is such an iconic laneway in Melbourne. Can you tell us how you made use of the space available to reflect this?

SAM: It’s quite a long and narrow wall, I think it’s about 28 metres long in total. So instead of just one big image, I broke it down and I treated it more like a storyboard, or a comic book strip.  So I can have multiple scenes in the same artwork. So I kind of treated it like an action set piece, fight scene rather than just one piece of art.

CAROLINE: I noticed when I walked past it you had Spider-Man in different positions.

SAM: It’s meant to play out like one little scene.

CAROLINE: Many thousands of people would’ve walked past your mural this week and it looks amazing. What is it that you want to draw their attention to? Is it the story you’re trying to create from the mural?

SAM: I didn’t really want to just slap movie artwork onto the wall. So I wanted to make a little cohesive comic book, something that would hold interest as you walked past it, so tell a little story about it as well as inform people about the new movie coming up.

CAROLINE: And are you a Marvel fan?

SAM: Yeah, actually comic books kind of got me into drawing as a kid, so it’s nice to have gone full circle again to go from copying comic books when I was about 11 or 12 I guess. That’s how I got into drawing, and then now that I’m a painter, as a career, and now I’ve gone back to painting for some of the stuff that got me into art, so that’s pretty cool.

CAROLINE: Can you tell us a little bit about your own art and style and how you combined it with what Sony Pictures wanted you to create?

SAM: I started as a commercial illustrator and graphic designer when I first got out of uni and then I slowly moved away from commercial stuff and then moved into painting and art. And I’ve been oil painter for the last coupe of years, and then working at Apparition doing the murals part-time and learning how to paint a bit more. And that’s gotten me into the commercial side of things again. And then so that’s informed how I’ve painted this a little bit, like, I bought an Ipad and I did all the paining digitally.

CAROLINE: How does that work?

SAM: There’s an app called Procreate and it works with an Ipad and the Apple Stylist Pin.  So it’s pretty much like painting. It does feel quite like traditional painting except everything is done digitally, which is pretty cool.

CAROLINE: So it’s very much a New Age way of doing art isn’t it?

SAM: Yeah, it’s the easiest for the commercial kind of stuff. If there’s changes by the client, it’s easier to go back. So, really hard to make changes to a physical painting once it’s, like, once you’ve kinda painted it. It’s just a faster work flow.

CAROLINE: And I’d like to go back to the film. The Australian premiere is very highly anticipated. Was there any pressure for you?

SAM: This is probably one of the biggest commercial jobs that I’ve had before. And I felt a lot of pressure to make it good, especially because I really wanted to do the character justice because I like Spider-Man so much and been a big fan of the comic books for a very long time. I wanted to do a really good job, do the movie justice and everyone involved justice for giving me the job.

Art Smitten host Nick had a great time speaking with comedian Floyd Alexander-Hunt whose upcoming show, Highly Strung will be showing at the […] 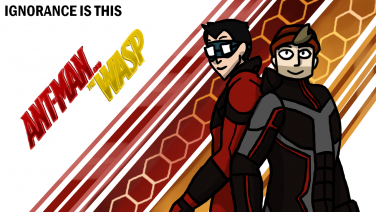 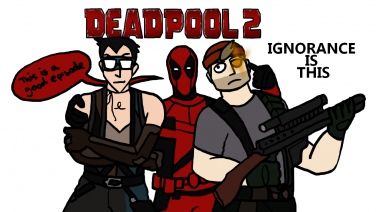 Ignorance is This Reviews Deadpool 2! 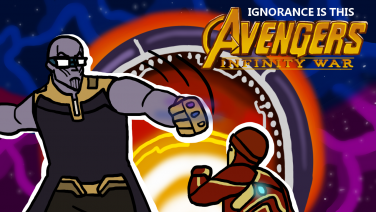 Ignorance is This Reviews (And Spoils!) 'Avengers: Infinity War'!