Ellijahna Victoria was a regular SYN volunteer from 2012 and now works as a producer for A Current Affair. 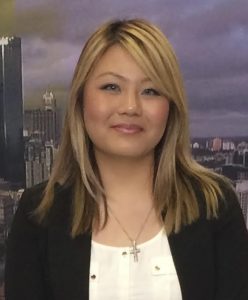 I joined the news team back in 2012, when I was still in high school and was doing all kinds of bulletins – breaky, lunch, drive and an extended 4pm bulletin. In 2015 I was fortunate enough to lead the news team as EP. I was also part of the Panorama team and the 1700 crew for Channel  31.

Yes, internships were my life during uni! I actually got into trouble because I arranged half my placements without consulting my course coordinator! I managed to complete 12 internships while completing my degree, including a short stint overseas with CNN Indonesia.

I now work as a Producer for A Current Affair on Channel Nine. It’s been a long road, but I got my job after interning there, which I scored from the Jacoby-Walkley scholarship.  Four weeks of internship turned into six months and I was lucky enough to get a job when a position opened up. I was also working as a casual Social Media Producer for 9 News while interning there.

Every day is different – you could be on the road, door knocking a whole suburb one day, and be in the office all day, the day after. If I’m on the early shift, I’ll start at 5.30am and go through all our emails and the papers to see if there are any potential stories to chase up, either to air that night, or to work into a bigger story for later down the track. My other tasks include research and fact-checking, lining up and interviewing talent, sourcing vision, organising graphics, shotlisting and writing the online copy of stories I produce. We do a lot of sneaky filming too, so sometimes there’s a bit of acting involved when I go out undercover with the spy cams.

What’s the best advice you’ve received about finding a job in journalism/TV?

Get as much experience as you can, and be persistent. Also keep in touch with employers so you’re in the loop if any jobs come up.

You’re working in TV now but you have experience in writing and radio. What made you want to pursue TV over the others?

Growing up I watched a lot of (commercial) TV so it’s something I’ve always been interested in. I think it was really the bells and whistles that came with the storytelling that drew me in – I remember watching one of the journos going undercover with a hidden camera and thinking I want to do that when I grow up. It looked really dodgy but really cool at the same time!

Have a job application you want proofread? Got an idea you want covered here? Are you a SYN alumni who wants to give back to SYN? The SYN Job Blog is updated monthly and you can get in touch with the Content Development Coordinator at content @ syn.org.au with any ideas.