SYN alumni, Jess Pantou, volunteered on a few flagships, presented her own seasonal Take That and spent a year as the SYN Nation Manager. These days Jess hosts the breakfast show at Hit Central Queensland in Gladstone. 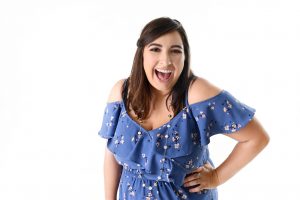 Have you been to uni? What did you study?
Yep I Studied Bachelor of Arts Media and Journalism at Swinburne University

Did you do any internships/work experience? How valuable were these in finding a job?
I took every volunteer op I could! SYN, 3MBS, The age, ACE Radio, and SCA: anyone that would take me.

When I was at uni I was so undecided about what I wanted to do I tried as many aspects of media as I could but fell in love with radio and pursued that harder.
It is invaluable to do as much work experience as you can because employers LOVE it and you can taste out the career and make great contacts too!

What did you do at SYN?
At SYN I started out on Get Cereal as a host and then as a producer. I also dabbled in Panorama (I was so serious! It didn’t work well for me!) and The Hoist (I had no knowledge of Aus music! ha ha)

Then I did Talks Manager for a year (too many emails but made a bunch of sweet contacts I’m still in touch with). In my last year at SYN I was SYN Nation Manager which was really fun and rewarding!

What are you doing now? Where are you working? How did you get your job?
Currently I am working for SCA at Hit Central Queensland in Gladstone as one half of the breakfast show Tim & Jess.
I started with SCA after a Careers Bootcamp in 2016 (I would highly recommend – they are a great foot in the door). I moved from Melbourne to Mount Gambier in November 2016 and then made the move up to Central Queensland in November 2018.
Basically after the Bootcamp I didn’t stop sending demos to all of my contacts until the Content director at the time was like “FINNNNNEEEE here have a job“.

What does a typical day look like for you?
I’m up at 4am and into work by 4:45am for a 5am start. We do a bit more show prep to make sure the plan looks good and then we are live from 6am.

Then 9am – 11/12ish is spent planning for following day/recording interviews or filming videos and promotional meetings.
Then a 3 hour nap most days when I get home. It’s been years and early mornings still kill me!

What’s the best advice you’ve received about finding a job in commercial radio?
Nail where you are at and the next job will come!

If you are at SYN and dreaming about that commercial gig make sure the show you produce at SYN is the VERY BEST it can be and send it out to anyone that will listen! Most people’s email is [email protected].
Form some strong connections and be consistent with your work

You’ve worked at a couple of different regional radio stations. What advice would you give to a volunteer moving regionally?
Join a sports club IMMEDIATELY! Nah – but seriously get involved in the community as much as possible. Small towns HATE outsiders so the sooner you embrace the community, the sooner they will embrace you! The quickest way to do that is sport! Trust me!