SYN alumni, Mahalia Dobson, volunteered on Represent, Victoria Votes and read news. These days, Mahalia is working as a video journalist for the ABC in Shepparton, Victoria. 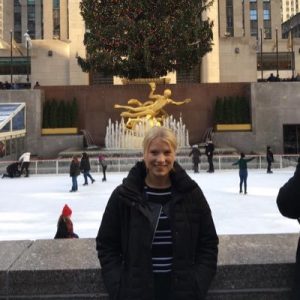 I went to RMIT University from 2013 – 2015. I studied a Bachelor of Communication (Journalism).

Did you do any internships/work experience? How valuable were these in finding a job?

I did four internships in total, two of which lead to ongoing employment. My first internship was for Crikey, where I filed for the digital site, as well as the Daily Review. I also helped research and produce stories for the outlet’s full time writing staff.

I also interned in the Channel 10 newsroom, and for ABC Radio Melbourne.

Following my internship at ABC Radio Melbourne I was hired as a casual producer and worked across the breakfast, mornings and drive programs, and even filled in for a few weeks producing ABC Statewide Drive Victoria. My most valuable internship was at the ABC’s national news television program, News Breakfast. This internship resulted in me being hired as an auto-cue operator, working alongside the incredible talented Michael Rowland and Virginia Trioli.

A few months later, I was promoted to a full-time producer. I ended up working on this program for almost three years. When I left in May 2018, I was working as an Associate Producer, in charge of building the three hour news program, setting the news agenda, organising live crosses with correspondents and metro and regional reporters, booking talent and writing and subbing TV copy (just to name a few things!).

Internships are incredibly valuable. I learned a lot, they helped me build up a strong network, and, most importantly, they helped me land a job I previously only ever dreamed of getting. I highly recommend anyone interested in going in to journalism to do as many internships as possible (they are hard work, and working for free isn’t an option for everyone).

I volunteered as a news reporter, regularly reading the midday and evening news bulletins. I also worked for Represent and actually presented the show’s flagship ‘Victoria Votes’ show during the lead-up to the 2014 Victorian election. I also helped produce Represents’ live ‘Budget Night Special’ in 2015, which went to air on C31.

I currently work as a video journalist for the ABC, based in Shepparton, Victoria. I work across radio, online and TV. I shoot and edit my own TV packages and have filed for various ABC news outlets including, News Breakfast, 7PM news, Australia Wide, and many of the Regional Victorian bureaus.

I was always interested in transferring across from producing to reporting, and so when the opportunity came up, I decided to apply for the Shepparton video journalist position. I was keen to stay at the ABC, but was interested in exploring a new area, meeting new people and sharing stories from regional Australia.

I don’t really have a ‘typical’ day… it all depends on the news agenda or what shift I’ve been rostered. I will typically read at least one bulletin per shift – be that at midday, or the early morning local bulletins. I then source original local news stories, conduct interviews and file for the following days local news bulletins. At least once a week I file a ‘local for national’ online story (which is basically any story that has happened in or involves people from my northern Victorian broadcast patch but has implications for and affects a wider audience). At least once a month I try to file a TV story for either the 7pm Victorian news or News Breakfast and produce a radio package for Australia Wide, AM, The Country Hour or our local ABC Goulburn Murray and Shepparton radio programs.

I love that every day is different – it means I get the opportunity to file for different platforms and cover everything from local sporting events to court cases to elections.

What’s the best advice you’ve received about finding a job in journalism and/or the ABC?

Throw yourself in to your internships. Work beyond the 9-5 and watch and read as much as you possible can. If you’re passionate, driven and have a strong understanding of what’s making news, you’ll do amazing things. And don’t limit yourself to being either a reporter or producer. These days most journalism roles require you to do both. Also – don’t be afraid to ask “dumb” questions. It’s a cliché, but everything I know I learnt from my extremely talented and experienced colleagues.

What advice would you give to a volunteer moving regionally?

Just do it. I was terrified about moving, leaving my friends, housemates and family, but it’s honestly one of the best things I’ve ever done. You will meet so many interesting people, get to visit so many places you’d otherwise probably never visit and learn so much. Life in the regions is very different to living in inner-city Melbourne, and I’m so glad I have had the opportunity to experience both.