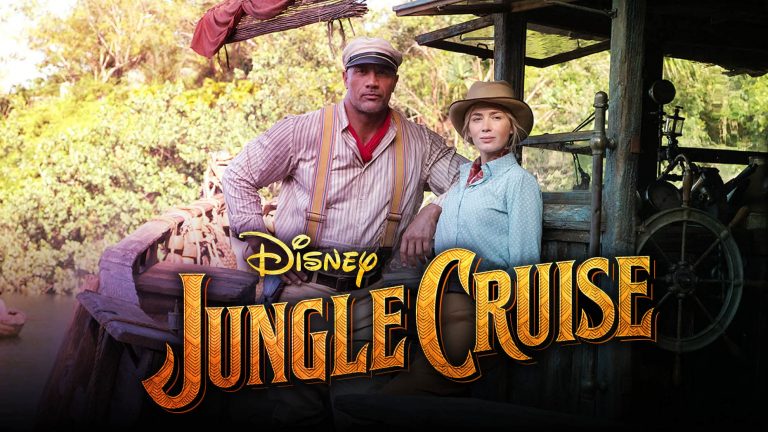 “Everything that you see wants to kill you… and can”

Australians know just how dangerous the wilderness is. From redback spiders to box-jellyfish, there really is nothing in this country that will not try to kill you. That makes us quite adventurous and daring; every day could be our last. Disney does not hold that same mentality. For the multi-billion dollar media conglomerate nothing is more dangerous than originality. Based off an amusement park ride in the Happiest Place on Earth, Jungle Cruise is as close as the company goes to exploring new territory and characters.

In 1916, Dr. Lily Houghton is determined to find Tears of the Moon; a flower with the ability to revolutionise medicine. She enlists the help of skipper Frank Wolff – who has more puns to prattle than practical advice – and his battered boat. As they sail deeper down the Amazon river, the more adversaries join the hunt. Their journey to find the flower was never going to be easy but they never could have suspected it would be this hard.

An all-star cast has been brought on to ensure the success of the film. Emily Blunt is wonderful as the unyielding Lily and Dwayne ‘The Rock’ Johnson is her perfect counter as pun-slinging Frank. Their chemistry is shockingly strong and above all fun to watch. Jack Whitehall offers some additional comic relief as the skittish brother of Lily, but Jesse Plemons outshines as unhinged German Prince Joachim.

Like an amusement park ride, lots has to happen for the story to stay engaging. The Amazon is the perfect foundation to build an adventure from. Not only does it come with dangerous flora and fauna, but there is the ability to include treacherous tribes and ancient curses. Jungle Cruise uses everything, nothing goes to waste. It mines the Amazon of its resources better than any petroleum company. Most of what it takes is harmless but its depiction of an isolated tribe might turn heads. Even though it goes against genre conventions, they lack any real depth and only serve the needs of the protagonists’.

Which is shameful because every other relationship is fully realised. One conversation between two unlikely characters leads to an overt (for Disney standards) coming out conversation. Its necessity is debatable but it proves how far the writers were willing to go to give characters meaningful arcs. When that same care is not shared across the board, it is glaringly obvious. That said, kids are not watching this to feel emotionally fulfilled. Designed to keep its target audience entertained, the film stays true to its theme park roots providing plenty of riveting action sequences while its narrative encounters some rough terrain.

While heavily reliant on computer-generated images, it does not take away from the impressiveness of the location. The digital Amazon is probably – and unfortunately – lusher and more vibrant than its source material. Many have criticised its reliance on the technology but its recreation makes sense. Much like the ride, everything is fake: the township, the river, the boat. All of it is an homage to an amusement imagineered over 60 years ago. In tandem with the CGI, sound design brings the jungle to life. Its realistic soundscapes and at times playful exaggeration work to draw in the viewer. As Frank falls down a tree, the sounds each time he hits a branch is as comical as it is disturbing. Technical elements fade into the background but all of them are in full bloom.

After the success of Pirates of the Caribbean (another Disneyland ride), the Mouse was quick to plan its next amusement park-themed movie. It only took 16 years and a pandemic but it finally sailed onto screens, big and small. Does it say anything particularly special? No, but it is insanely difficult not to get wrapped up in its infectious characters and stunning visuals. Admission to Jungle Cruise results in an unexpectedly wild ride, with enough ups and downs to get your heart pounding and head spinning.