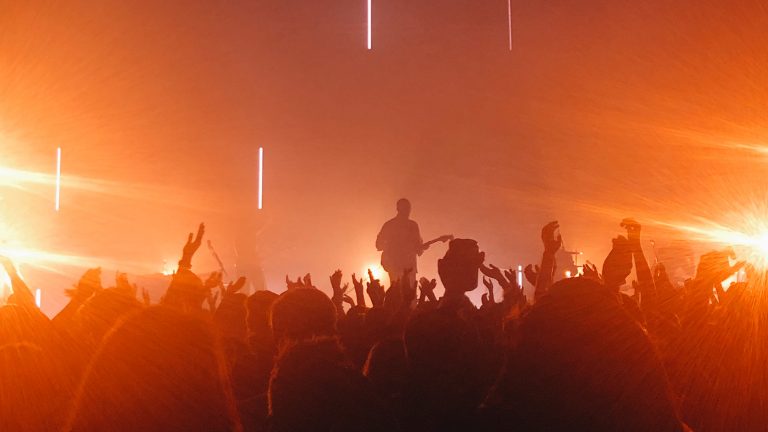 The Forum was electric as the crowd poured in to experience the first show of The Jungle Giant’s ‘Heavy Hearted’ tour on Thursday 12th September.

Toni Yotzi and Adi Toohey used their magical taste for beats to prime and energise punters for the main set to follow.

The eyes of the crowd widened as the infectious instrumentals of the title track from The Jungle Giant’s 2017 album, ‘Quiet Ferocity’, vibrated through The Forum. As band members, Sam Hales, Andrew Dooris, Keelan Bijker and Cesira Aitken took to the stage, punters were uncontainable- screaming and cheering in anticipation of what they knew was going to be an incredible live set.  Limbs were loose and smiles were big, ready to dance through the next 75 minutes of pure Australian indie goodness.

‘AWWW YESSS’ echoed through the venue as the band snapped back into the depths of their discography with ‘She’s A Riot’ from their 2013 debut album, Learn To Exist. They gave the audience a little taste of 2017 with ‘On Your Way Down’ before taking a long and joyful trip back down memory lane.

The crowd were indulged in more tracks from Learn to Exist with ‘Skin to Bone’, ‘Anywhere Else’ and ‘I Am What You Want Me To Be’. Nostalgia painted the walls of The Forum-  I was taken back to the days of sitting in maths class listening to The Jungle Giants on my pink iPod nano, hoping that one day maths wouldn’t be part of my life equation (the only equation that matters now is 1 Jungle Giants concert + 1 smiling India Weaver = A bloody good time)

Although Sam Hales took time to express his concern that things weren’t following rehearsals, these little happy accidents (as Bob Ross would say) only further engaged the audience.

The crowd bopped through the hypothetical time machine as they were given a taste of more tracks from the band’s most recent album. ‘In The Garage’ saw Dooris come free of his leash and take over the venue. Punters were spellbound; mimicking every jump and bop that Dooris made.

Hales took back the command of the audience, “we’ve tested your dance moves and tested your voice, but now we really want to turn things up to the max”… and did exactly that by moving through the stand-out tracks from 2017’s Quiet Ferocity– from ‘Feel The Way I Do’ right through to ‘Waiting For A Sign’. During this track, Sam exclaimed, “I am the best country dancer in the world”… and look, I don’t have much of an idea of the country dancing landscape but the man is undoubtedly a square dancing god.

There is something to be said about Sam Hales as a frontman. From the square dancing to the constant crowd engagement, he sure knows how to hold an audience in the palm of his hands. Whilst he has always been an excellent entertainer, it almost felt like this new era of The Jungle Giants has unleashed something from the depths of his soul; he was contagiously electric, engaging, effervescent. Heads followed him as he worked the stage from left to right and everyone in the crowd was hoping that they were next to be looked or pointed at. I’m sure he would have no trouble starting a cult…if he’s that way inclined.

The audience could feel it brewing… the live premiere of The Jungle Giants’s latest (flaming hot) single, ‘Heavy Hearted’. The introductory keys began, but were almost inaudible due to the screaming and cheering they activated from the audience. Without a second thought, punters were clapping and jumping around like tomorrow didn’t exist.

Even though the crowd were more than happy to end their night there, the band knew that deep down, punters still wanted more (and we totally did). The Jungle Giants followed up their electric set with a pair of tracks that really encompassed the old and new eras of the band- 2012’s ‘You’ve Got Something’ and 2017’s ‘Bad Dream’.

Looking back on the night, the setlist was so incredibly well crafted. There was a hint of electronic indie goodness to kick off the night, but The Jungle Giants showcased their transformation as a band. They moved the crowd through the classic indie pop-rock days and through the rock-electronic fusion moments to ease them into this eclectic and infectious ‘Heavy Hearted’ era.

The enthusiasm and love that radiated from the crowd confirmed that The Jungle Giants really are Australia’s indie sweethearts. Their ability to not only execute the flawless transition from a classic indie pop-rock band into an example of indie electronic excellence, whilst keeping their original fan base, is more than proof that The Jungle Giants are not only here for a good time, but a long time.