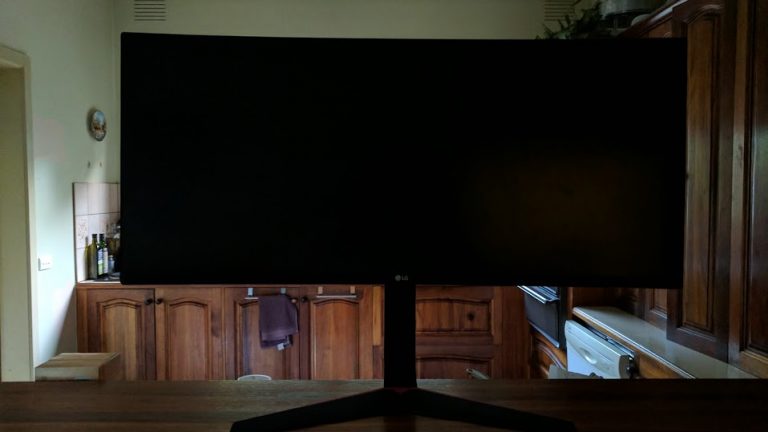 The LG 34UC79G has (rightfully so) risen to the top of my “favourite monitors” list. Mixing aesthetics with a top quality, reasonably priced IPS ultrawide display makes me feel like a kid in a candy store. Except instead of candy there is computer equipment. And I’m an adult.

Design
The sleek, red-tinted black design is just beautiful. Having been born of a gaming businessman’s wet dream, the display features lots of sharp edges and minimalistic branding to create a product that can be used in both an office and a home environment.

The monitor comes with the usual cable-tidy (attached to the back with clips) and a stand that is somewhat questionable, with the monitor slowly rising up over time being an issue that seemed to rear its head every couple of days.

This unit also does not have any significant rotation with the standard mount, although with it being a curved ultrawide I don’t know how well that would have worked out anyway. Probably for the better in all honesty, good thinking LG. VESA mounts are available for us folk who decide to go against this though.

The monitor takes video through Displayport (1.2) or HDMI, and acts as a USB 3.0 hub with two USB ports (with one able to use quick charging, nice touch). It also uses an external power supply rather than the typical jug plug, which assumedly helps keep the width of the display down.

The only thing that really bugged me about the design of this unit is the placement of the OSD button. It pains me to say that it is once again on the bottom of the unit, where the use of it usually resulted in the monitor springing up to its max height uncontrollably.

Thankfully the OSD itself was easy to navigate and housed generally useful features, so credit must be given where it is due, but c’mon guys, navigation buttons on the bottom of the display are the worst.

Curved Ultrawide
As my first foray into the wonderful land of Ultrawide displays, I will admit that I am a tad biased (on this aspect at least), but wow is it an experience. I was sceptical at the start (having simply put it down to a fad such as 3D television and mice with 2000 buttons), but after using it for approximately a month I began to see the real benefits of it.

The main of which being immersion. I’m going to say it again, but wow. Playing GTA V on this monitor in full screen is like becoming some form of sadistic deity over people with guns and fast cars. It’s great.

The other benefit (which took me by surprise) was productivity. There’s something about only having one display (rather than three) with no borders that curves around you that really gets you into a productive mood. Had I have had a couple more cans of energy drink (and a better set of eyes) I could’ve sat at my desk all day (not like I do that already anyway).

Display
Getting into the technicalities again, the display is a 144hz, FreeSync (that’s the AMD one) compatible 2560×1080 IPS screen. A subtle curve accompanies this, alongside presets built for specific types of games (such as the two FPS presets and the RTS preset). There’s also a motion blur reduction option and a black stabiliser, but these are rarely useful.

The display itself was crisp and offered great colour accuracy (to my somewhat untrained eye at least), and fast-moving games displayed very well (tested with Overwatch and CS:GO), with minimal motion blur and decent representation of shadows.

It is worth noting that the display is only 1080p (as opposed to the 1440p norm), however I don’t really feel like it made that much of a difference, especially at this price point.

Conclusion
For a 32″ Curved Ultrawide display with all the features that this unit boasts, I think it’s fair to say that the LG 32UC79G has everything you could ever want (aside from a cooler name) at a pretty reasonable price.

If you’re considering purchasing this monitor for gaming, it is also worth taking into consideration the fact that many games still don’t have good support for ultrawide resolutions. A prime example of this is Overwatch, where the resolution is supported, but cuts off part of the vertical axis to prevent you having an advantage. CS:GO does something similar, except with really buggy UI elements thrown into the mix.

This definitely isn’t me saying don’t go for it, gaming on this monitor is like a beautiful dream, it’s just that if you’re playing competitively you may want to keep a cheap 16:9 monitor hidden somewhere on your desk for those all-important games.

And if you’re thinking about buying this for business? Hell yeah dude, go for it. There are monitors like the LG 34UC97 that would better fit the aesthetic of a modern office environment, but for the price and the quality of the product, you’re definitely not missing out on anything.

Disclaimer: LG sent us this unit to review. The above is unbiased in that regard, but sharing is caring.