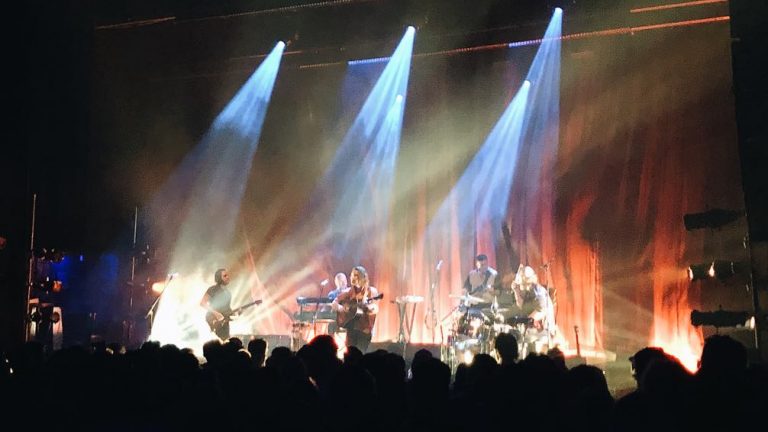 Australia’s favourite folk uncles, Boy & Bear, took to The Forum on Friday 16th of August to celebrate the release of their new single ‘Hold Your Nerve’ and to tease their long-awaited fourth album, Suck On Light, set to be released on September 27.

The crowd had already packed in in preparation for the double female lineup of supports. Jess Day kicked off the evening with her indie pop-punk sound, playing through her discography which included her newly released single, ‘Rabbit Hole’. Tia Gostelow took the stage soon after, taking the audience through her 2018 EP Thick Skin. Gostelow also treated the audience to a live performance of her Triple J Like A Version, ‘We Are The People’ (originally performed by Empire of the Sun), followed by her new track ‘Get To It’. The audience was enthralled by her bold and flawless vocals.

As preparation for the main act began, you could have mistaken The Forum for a high school reunion. It seemed that everyone was bumping into old friends and high school mates, myself included. This sense of reunion only grew stronger as Boy & Bear walked upon the stage. The crowd, a densely populated group of original Boy & Bear fans, were reunited with the band who soundtracked so many memories spanning from 2009 to 2015.

The Sydney 5-piece opened with ‘Old Town Blues’ from their 2013 album Harlequin Dream. The audience began to bop around and grin ear to ear- behaviours they would go on to maintain for the entirety of the 90-minute performance. Nostalgia was turned into overdrive as Boy & Bear took a dive even further back in their discography, with the infectious track ‘Milk & Sticks’. Arms were thrown over the shoulders of mates as they joined forces to sway together, sing their hearts out and reminisce on their fondest memories of 2011. After finishing the first dip into their back catalogue with ‘Three Headed Woman’, the band snapped back into the present with the b-side ‘Work of Art’ that complimented their 2019 comeback. The audience was still like the waters of a lake, formulating new memories that would grace this new era of Boy & Bear. The track displayed the new electronic edge that now compliments the faultless combination of Dave’s vocals, those gentle drums and signature guitar riffs.

It was quite clear that despite their love for the new material, the crowd were here for the true folk-laden Boy & Bear sound that lies deep within their discography. The unified swaying was at a night long high as ‘Bridges’ bounced off the walls of The Forum. By this point, the audience had established that they would form a choir and sing along to every song for the rest of the gig. Usually, this approach makes my skin crawl… past memories of fellow gig-goers taking the whole sing a long thing too far flashed past in my mind. However, I quickly learnt that 99.9% of fans had studied the band’s back catalogue so well over the years that they had established the ability to sing every note almost perfectly (the girl behind me was the 0.1%). It was almost as if Boy & Bear knew this coming into the show, as the majority of the setlist was formed from 2011’s Moonfire and 2013’s Harlequin Dream.

There was an undeniable sense of appreciation that radiated from the 5-piece. The setlist was almost shaped to be a thank you to their fans who stuck by them through their hiatus, returning to support the band once again through their new era. Looking around, it was blatantly obvious that the crowd were deeply moved by hearing their favourite songs in the live space once again. The band sandwiched another taste of their upcoming record in the middle of this state of nostalgia. The sparkling title track from their upcoming album, ‘Suck On Light’ further set the scene for the new Boy & Bear era and gave the audience a sense of the sounds they can expect to hear throughout the release.

The night concluded with fan-favourite tracks ‘Feeding Line’ and ‘Walk the Wire’… or so we thought. For the majority of the audience, this wasn’t their first Boy & Bear rodeo- they were familiar with the band’s stance on encores and previous lack thereof. However, it seems that during their hiatus they have grown to love the old encore, as lead-singer Dave admitted upon his return to the stage. A bold and jam-packed encore kicked off with ‘Limit of Love’. It then progressed into their career-defining cover of ‘Fall At Your Feet’ (originally performed by Crowded House), which blended into ‘Heart of Gold’ for a brief moment, before the crowd joined the band to belt out the final chorus. The sublime ‘Southern Sun’ closed the night.

As fans left the venue beaming with joy, it was clear that Boy & Bear make more than just music- they soundtrack moments and memories. Their timeless sound, infectious beats and karaoke-friendly lyrics have cemented their position as not only an iconic Australian band, but a national treasure.