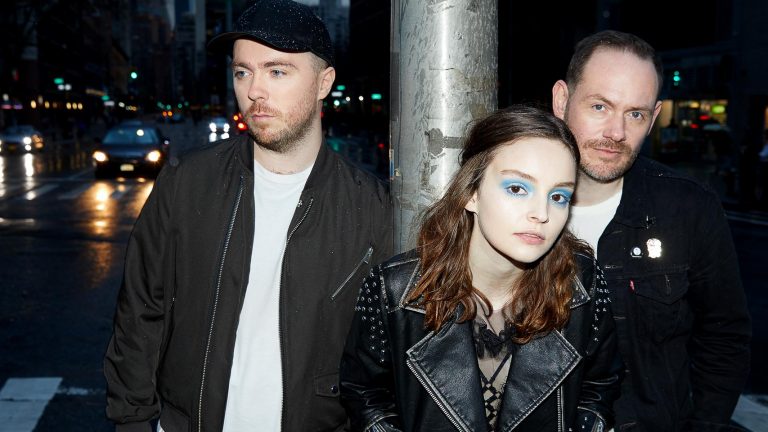 On a choppy and windy Monday night, a large crowd of fans lined up at Margaret Court Arena to catch the synth-pop trio CHVRCHES. With their Splendour in the Grass FOMO finally satisfied, the rare chance to catch the Scottish group in Australia was enticing for local fans.

The night was opened by Sydney trio Mansionair, who warmed up the cold bodies in need of some movement. The group’s sound is diverse, melding a mixture of electronic samples and fast-picked guitar. Creating a mood something along the lines of “lounge-dance”, the band produced a sound that was chilling and smooth but also brash and danceable. Their singer, Jack Froggatt, had a soaring falsetto voice that sounded lush on the more sombre tunes, namely ‘Easier’ and ‘Speak Easy’. The band’s way of creating punchy soundscapes featured in spades on their most recent single ‘Technicolour’ which utilised a catchy hook and an infectious drum beat. ‘Astronaut’ saw Margaret Court Arena light up with the crowd’s phone lights and a few stray lighters in the audience. A surprise twist on the set came through the group showing off their collaborative effort with US dance duo ODESZA in ‘Line Of Sight,’ exploding in a massive breakdown.

Due to a delay in the trip between Sydney and Melbourne, the set times were moved around and sadly Wafia’s set for the night was cancelled. Despite having to cut their set slightly shorter, CHVRCHES didn’t really seemed phased as they pulled out the perfect crowd-pleasers from their now three album discography.

The set donated into action with ‘Get Out,’ the band’s initial single for the year with the catchiest chorus and a dynamic beat. The performance is spearheaded by the band’s frontwoman, Lauren Mayberry, who danced and sung across all edges of the stage. She was joined by the other two founding members of the trio, Martin Doherty and Iain Cook, who had their own booths decked out with synthesisers, and bass guitars. The instrumentation for CHVRCHES is very live with a live drum set playing over sampled presets and guitars strumming serene chords.

The set was varied and surprising in the way it pulled from various parts of the band’s career. Older cuts from their 2013 debut album The Bones Of What You Believe in ‘Gun’ and ‘We Sink’ were mixed in perfectly with tunes from their new album Love Is Dead. Newer tunes like ‘Graffiti’ and ‘Miracle’ went down a treat and were greeted with just as much excitement as older tunes like ‘Leave A Trace’ and ‘Never Ending Circle.’ Throughout the entire show Lauren had passion and fervour, belting out every memorable hook. She was also an incredibly personable performer, as she gave honest and hilarious stage banter between songs. For a mix-up, Martin took the reigns of frontman to sing two of the group’s songs. ‘God’s Plan’ a cut from Love Is Dead saw Martin groove along the stage to the tune’s thumping beat. His other feature was on ‘Under The Tide,’ a slow-burning number that gave punters a well-earned rest from dancing.

Before long, fans would have to dance relentlessly again as CHVRCHES pulled out all the stops to get fans moving with ‘Forever’ and eventually ending the initial set on ‘Clearest Blue’ with a bang with its gigantic breakdown. Due to the delay fan favourites ‘Lie’ and ‘Tether’ were gone but not entirely forgotten as Lauren promised two more songs in their encore. Ending on ‘The Mother We Share’ and ‘Never Say Die’, CHVRCHES reputation as a larger than life synth-pop act was realised.