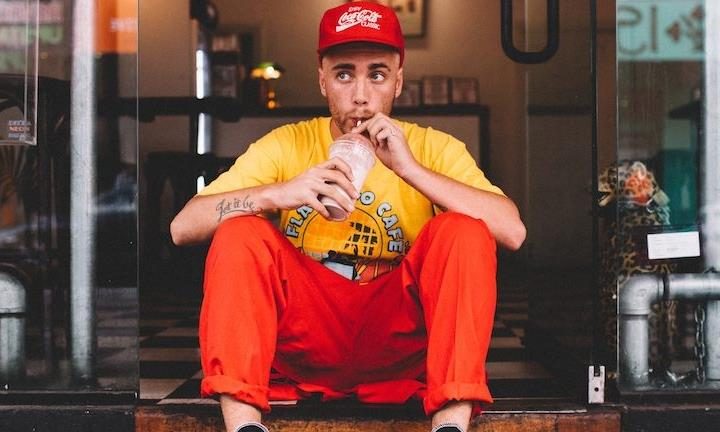 Northcote Social Club was certainly living up to its social name last Thursday when those from far and wide trekked to see Lakyn perform. First on the bill was Charlie Threads, entertaining the early crowds with some thick basslines getting the crowd moving to his newest single ‘Questions’, setting the tone for the evening.

The eager crowd continued to file in, filling the floor with people and filling the air with anticipation waiting for Lakyn. Jazzy organ chords began as a montage of Lakyn strutting around his neighbourhood wearing a Lei appeared on stage. He was bouncing around the streets of Northcote and ended up in – you guessed it – the Northcote Social Club. He climbed down the stairs many punters would have recognised from their trek to the toilets and wandered onto stage and then (surprise!) the real Lakyn walked onto stage. Unfortunately, he wasn’t wearing the same clothes so a couple of points off for lack of continuation. Despite this, the upbeat intro music immediately made me like him and put me in a great mood for the performance. The video did not stop there and, in fact, played throughout the entire show, featuring a lot of clips from 80s TV shows, iconic online moments and even some home videos featuring Lakyn and friends. It brought me back to the old days of being 18 and going to the Melbourne nightclub famous for being gross*, Rats, where there was a multitude of screens forever throwing back to TV shows and iconic moments of the early 2000s.

Joined only by his drummer, Gareth, a beat pad, and his loop pedal, Lakyn leapt into ‘View Looks So Good’ from his newest release, the & Pains EP. The reverb was high on his guitar and the use of the loop pedal was giving me some major Tash Sultana vibes and it was really working on the crowd. Lakyn then leapt into ‘Soldier’, a song written for his grandad. The slow-moving jam really showed off his vocal range and his creative sampling that was present across his work.

Something I really enjoyed about this gig that I don’t usually get to experience was to be standing right at the back of the room, watching the crowd move and engage with the performance, as well as seeing the audio engineer hard at work. Controlling the sounds and lights of the performance, the audio engineer did not stop for the entire show and ensured that every aspect of the show was working harmoniously. Being able to see this behind-the-scenes work really made me appreciate the multitudes of people that go into making a performance what it is.

We were treated to a lot of unreleased songs throughout the set, my favourite being ‘Hold It Down’. With a very whimsical, fairy-tale motif throughout the song, it is not surprising to hear that the sounds of Lakyn are very much inspired by one’s wild imagination as a child. Despite a lot of his work being quite synth heavy, the playfulness and experimentation of a child is seen in his use of left field instruments, like brass, harps, and strings, mixed with a hip-hop beat that somehow just works.

The trademark Mac Demarco-style twangy guitar and lyrics guided us into his final two tracks, highlights from his & Pains EP, ‘Slumdog’ and ‘Sweet Days’. These big melodic songs really had the crowd moving with harmonies reminiscent of Matt Corby and made me want to go on a big road trip and blast them in my car with the windows down.

Does Lakyn’s name sound familiar to you? You might have heard his voice screamed by adoring fans when he performed on The Voice back in 2012. He auditioned initially with a cover of ‘Kids’ by MGMT, encouraging judges Joel Madden and Seal to turn around in their chairs and made Delta Goodrem do that thing where she closes her eyes and puts out her hands to really feeeeel the music.

While he has released a lot of his own music, Lakyn has also put out an EP of covers, originally called Not Original Material. The EP is full of incredible covers, my favourites including ‘Strong’, originally by London Grammar, and ‘Thinkin’ About You’ by the king Frank Ocean. While I was practically begging Lakyn to play one of these covers all evening, he treated us to two new covers as part of his encore. The first was a stripped back cover of the Madonna classic ‘Like A Prayer’ that had the crowd singing and grooving along. Much like in the song, his voice sounded like an angel sighing. I don’t actually know if that’s meant to be a good thing in Madonna’s words but it was a real good thing when I heard it. Lakyn ended on another Frank Ocean cover, one that makes me lose my mind every time I hear it, ‘Self Control’. This original is so beautiful with a plethora of harmonies and Lakyn certainly did it justice, with a ton of looping, capturing the essence of Frankie.

While Lakyn might still be known around town as ‘that kid from The Voice’, as this was the reaction from most of the people who heard I was seeing him, he has really developed his skills and sound since being on the show and has a lot of new content being pumped out that definitely won’t cause you any pains.

*These are the words of the author and do not necessarily represent the views and opinions of SYN Media.

Photo courtesy of the artist.