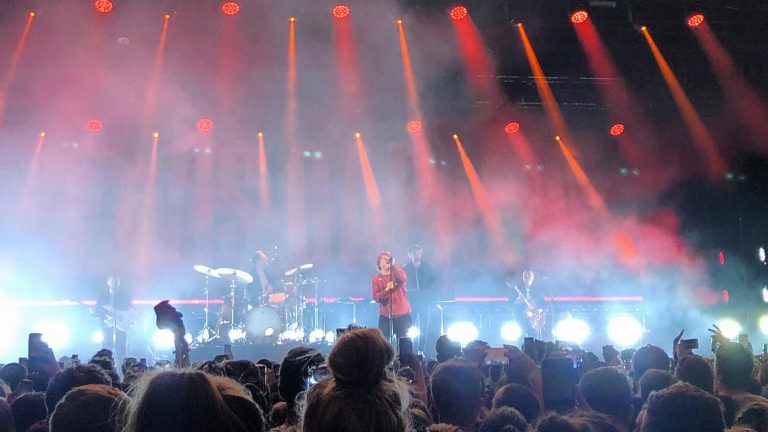 The young and old, as well as the entire Scottish population of Melbourne flocked to Festival Hall to immerse themselves in the wonderful world of Lewis Capaldi on Friday 3rd of January.

Byron Bay’s Yorke opened the night, with effervescent vocals that were refreshing for those inside the oven-like environment of Festival Hall. Sweet pop beats filled the air as the crowd began to bleed in for the main act. Yorke finished off with her triple J favourite ‘Thought I Could’, which had the audience swaying and singing along.

As fans were growing tired of fanning themselves with ticket stubs, the backing music grew louder. The crowd joined in a chorus for Robbie Williams ‘Angels’, before it was drowned out by the bellowing beat of  ‘Naughty Girl’ from Australian cult-classic TV show, Summer Heights High. As the audience screamed in anticipation, flashing lights and confetti heralded the arrival of Lewis Capaldi to the stage.

Capaldi opened the night with the opening track from his debut album Divinely Uninspired To A Hellish Extent, ‘Grace’. From the second those soulful vocals entered the ears of the audience, Capaldi had them all in the palm of his hand, encouraging them to sing the lyrics back to him as he grinned from ear to ear.

The crowd were serenaded with ‘Forever’ and ‘Don’t Get Me Wrong’; each song met with an audience-wide sing-along that sounded as beautiful as the Australian Girls Choir (this is no joke- I was stunned by the quality of vocals coming from my fellow gig-goers).

He then took a moment to perform a new, original song ‘My T*ts Are Sweaty’ to the tune of ‘Amazing Grace’ (I mean, he wore long sleeves and long pants on a 37-degree day to perform at Melbourne’s most poorly ventilated music venue… what else did he think would happen?). After being urged to take his top off by members of the audience, he reminded them that it was ‘2020’, that he ‘was not a piece of meat’.

To celebrate the recent release of the extended version of the album, Capaldi treated his audience to one of his famous long-winded stories. Moving between self-promotion and self-deprecation in this story of Capaldi Vs Record Label, Capaldi flaunted that comedic side that has complimented his musical success so well. The audience was still in stitches as he weakened them at the knees with the opening lines of ‘Before You Go’, his latest single.

As Capaldi continued to treat his crowd to more music, he was met with gifts thrown onto the stage. He was soon dressed in an Australian flag, a bucket hat and horrific Australian flag sunglasses (of course, he is the sunglass king)…. Lewis Capaldi, Australia’s Sweetheart.

He then warned, ‘this next song sounds like it’s happy but it’s f*****g sad, so strap in Australia!’ before jumping into ‘Hollywood’. The juxtaposition of these emotionally rich songs with foul-mouthed comedic moments was an emotional workout, but one I thoroughly enjoyed.

As the setlist progressed, I went through moments of wanting to cuddle Lewis Capaldi to soothe his obviously broken heart, but also cuddle him because he is just so damn loveable. He isn’t afraid to be himself, isn’t afraid to showcase his emotions and isn’t afraid to let us know that he is sweaty in explicit places. It’s his openness that has gained him so much respect from both a talent and personality perspective.

Whilst Capaldi’s time in Victoria was cut short by the cancellation of Falls Festival, the velvety vocals and witty comedy that combined to create his Festival Hall set was all it took to change the Scottish stereotype. No longer will Australians make stupid comments about haggis- they will now marvel over Lewis Capaldi, a dish best served hot.