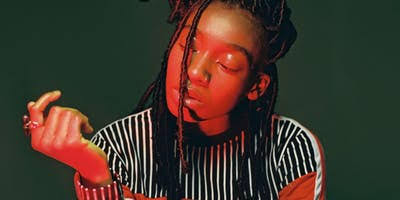 North London MC, Little Simz, blessed us with her third album, Grey Area, in March of this year. She’s been touring around the globe, with sets at Glastonbury, Splendour in the Grass, and just last Sunday, July 21, she graced us with her presence at the Corner Hotel in Melbourne. The artist, who released her debut album, A Curious Tale of Trials + Person in 2015, through her own record label, AGE 101, is a force to be reckoned with.

She emerged to the thrilled crowd at the Corner, belting out her track, ‘Boss’ from the new album. In the live performance of this track, she maintained its distorted vocals by using a mic’d up megaphone, swaggering around the stage showing us how cool she really is. I personally could not explain this track any more fittingly than as the gorgeous lovechild of Beyoncé’s ‘Don’t Hurt Yourself’ & Azealia Banks’ ‘Yung Rapunxel’. If you’re not familiar with these tracks, check them out, and keep an ear out for the similar sense of irateness as well as catharsis.

Simz then continued pleasing us with tracks off Grey Area, including ‘Therapy’. This track ends with a quintessential Little Simz bar:
“Teach my daughter about the wonders of the world, I’m convinced,
If she’s anything like me, I’m raisin’ a king”.
She then dove into her collab with Jamaican artist, Chronixx, on their track ‘Wounds’, and we also got a soulful rendition of, ‘Sherbet Sunset’. On top of these stellar renditions off Grey Area, we also heard a few throwbacks, most notably, ‘God Bless Mary’ which tells the story of Simz’ artistic evolution & relationship with a tolerant neighbour.

Wearing an oversized white business shirt with some dark, funky overalls, Simz donned an outfit I like to characterize as “When you’re teaching third grade in the AM, but spitting some fire in the PM”. Also making clever use of the venue’s lighting, Simz commanded the stage, with her most poignant moments being illuminated in a mirage of gold.

Simz is an artist who has spoken a lot about her love for live instrumentation. She evidently included this in her most recent album, and this was also translated to her live set. Not only did her bandmates accompany her with some rad solos on the drums & keys, but Simz also showcased her own multi-instrumental skills on the bass, guitar & beat pad. The show had two musical intervals throughout, and these gave the audience a chance to groove a wee bit in anticipation of what was next, and the artists on stage a chance to relish in their art. The later interval of the set even included an interpolation of Biggie Small’s, ‘Big Poppa’ to which Simz strummed along on the bass. We were even lucky to have what I believed to be white roses thrown out to us with affection and gratitude.

The peak of the evening came when Grey Area’s ‘Venom’ arrived. We all knew this song was going to get crazy – Simz herself prefaced it with, “when it drops, I need you to fucking lose it”. The track has a strong political message, and is opened with a menacing violin line that builds until Simz proclaims to tense silence, “Never givin’ credit where it’s due ’cause you don’t like pussy in power”. Picture this, the drop controlled us like a hypnotist’s mantra. I saw my friend ride the wave, deeper into the crowd. I didn’t see him again until we exited the Corner Hotel, “two dumbstruck victims of one very powerful drop”… That image was perfectly illustrated by my friend when I was telling her about this epic moment of the gig.

The evening reached a touching point when we got to one of the stand out tracks off Grey Area. ‘Selfish’ was introduced with the humble affirmation, “I’m not the only one who’s gone through shit”. This brought the crowd even more on board, and we all sang the beautiful refrain of this song in unison.

And of course, what would a Little Simz set be with without her ode to North London, ‘101 FM’? This trippy classic recalls her pirate radio days, and is clearly a very dear track to Simz. Although it celebrates a culture the majority of the crowd didn’t belong to, the joy in Simz’ eyes evoked a universal sense of nostalgia.

Giving us a pensive breather in lead up to the grand finale, Simz floated into ‘Flowers’. A vulnerable song that features the vocals of elegant singer-songwriter Michael Kiwanuka, it depicts her struggle of being told she’s a “liability, not an asset.” and putting on a “brave face for the camera”. This was an excellent performance, with soothing saxophone that shipped us all off into the tide our thoughts.

And of course, at the end of the night, we rejoiced in the fierce percussion heard in the absolute ripper, ‘Offence’. Just as we thought the gig was done, her drummer, Steve, wound us up and took us to one last chorus – giving us all one last shot to get our excitement out, and express our appreciation.

Little Simz is an artist who has been praised for keeping her focus directly on hip hop & sticking with delivering straight fire bars as opposed to merging into a pop oriented sound. This commitment and hard work was truly felt last Sunday night, especially when she would fixate her gaze mid-song on a spot on the wall behind us to centre herself. You could not help but be enveloped in her deep stare as she let her graceful, yet painfully human self manifest in front of us. The pairing of her introspection, and her celebration of what makes Little Simz ‘Little Simz’, has created true art. I’m exceptionally grateful to have been able to enjoy this live.

Little Simz was supported on July 21 at the Corner Hotel in Richmond by Perth MC, Arno Faraji, who’s on a meteoric rise. Faraji is known for his killer tracks such as ‘things change’, ‘Destiny’s’, and a ‘‘Bless (What It’s Like)’, a collab with fellow hip hop artist, Remi & producer, Sensible J. Very excitingly, Faraji recently dropped his latest single, ‘Sneakers’, and has an imminent debut national tour, FARAJI SZN. Ticket information can be found here: https://lnkfi.re/c4yUYlsi?fbclid=IwAR15QI1P08z8BGTxbBHy9QFqBLUIr8JFX5Pg5A95NalYAm57BWDhRNb6gwI