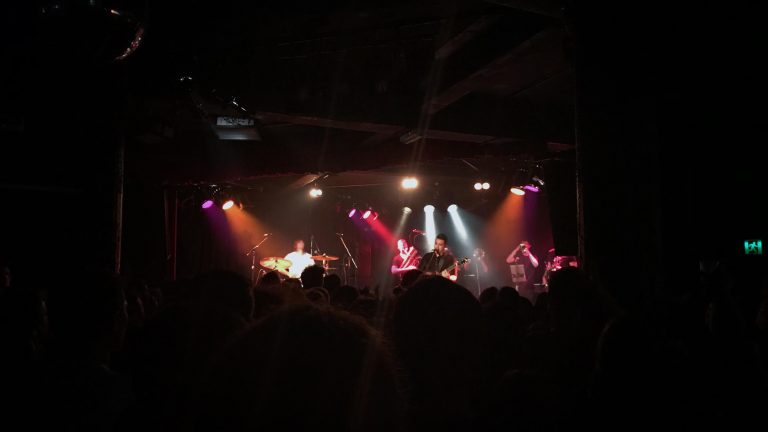 Thrashing soul duo Polish Club took to a sold out Corner Hotel on Saturday 7th July, bringing along with them – horns. Joined on stage by a 5-piece brass ensemble, Polish Club turned their garage rock sound all the more Motown. Also on the road with them were Sweater Curse and All Our Exes Live in Texas.

To get the good times rolling Brisbane indie-rockers Sweater Curse started the night off with power and poise. With only a few singles under their belt, the band put on a strong set of super well-arranged, catchy tracks. ‘Can’t See You Anymore’  was an absolute pleasure to see live, in which Monica’s voice commanded the room that was quickly filling up.

Folk-pop four-piece, All Our Exes Live in Texas, jumped on stage next to put on an absolutely charming set with their playful harmonies and refreshingly modern take on folk tunes. The Devil’s Part’ was a dazzling highlight that fully captured the essence of this wonderful group of folksters. Between their exceptional talent playing mandolin, accordion, ukulele, and guitar, and each of their unique voices, these four mesmerised and warmed the crowd up before the total change of Polish Club’s pace.

This was not the Polish Club we knew. This was Polish Club … with horns – ‘cos why the f**k not’. Joining singer-guitarist Novak, and drummer John-Henry, was a five-piece ensemble of brassmen. A sousaphone (yeah the big boy of the horn family), a saxophone, a trumpet and two other instruments that look like the latter but are given names I could not repeat nor spell for the life of me. Together the punchy personality of Polish Club and their accompanying horns elevated their live show to new heights.

If you had expected Polish Club to kick off their show with a horn-clad cover of KC & The Sunshine Band’s ‘Give It Up’  then yes, you would be absolutely correct. The expanded band nailed it with this early eighties jam, turning those synth lines into blaring brassy hooks. The Melbourne crowd immediately knew what had hit them with this one and instantly responded by getting into a dance, clapping at the downbeat and singing along to every word they knew. You could feel the hilarity of the moment and pure joy spread across the room as that communal ‘Na, na, na, na, na, na, na, na, na, na, now’ kicked in.

But could the novelty of the horns hold up for the rest of the night? To put it shortly – yes.

Throughout their set, Polish Club delivered a mix of their most familiar tracks that did not fail to entertain. With ‘Gimme Money’, ‘Come Party’, ‘Beeping’  and the faster-paced songs of the evening, they went out guns blazing to put on a high-energy performance that was only made more intriguing with the encompassing brass flare they had brought with them. It was these moments that truly highlighted Novak’s singularly assertive voice and brash blues guitar playing, and JH’s ability to thrash it out on the drums without missing a beat. The horns were not forgotten either. You couldn’t help but listen in and focus on where the brass met the music to perfectly create a unique rendition of Polish Club classics.

As to not get lost in the brazen – or should i say, ‘brass-en’ – antics of the evening, the band and their brass buddies unruffled the atmosphere and slowed it down. ‘Divided’ and ‘Don’t Fuck Me Over’ alike were tempered moments that hushed the crowd until a unifying singalong ensued. Proving that Polish Club can balance a set list and dig up mounds of emotion with an impressively imposing energy. This tension breaks between each song as the super down-to-earth Novak, JH, and the fellows on the horns, banter between themselves and the crowd, which also gives time for everyone to laugh and regroup before heading into the next track. Again, that will have everyone listening hard to hear where the horns have put themselves into the song, and how it just works so damn well.

The last song of the night however, is by far the most surprising of them all. Spice Girls. That’s right, a cover of Spice Girl’s own ‘Stop’. This was just pure bloody fun. Polish Club turned it their own with their loud rock n’ soul prowess and their zesty horns to back them up. The whole crowd got behind this one, singing every word with their utmost enthusiasm, along with the duo who took it in turns sharing the verses of each Spice Girl. Seeing JH pull off playing the drums with one hand, while reading off a sneaky lyric sheet with the other was impressive and amusing. Bookending the night with two covers was different, but not opposed by the audience, we were dealt our fair share of Polish Club’s finest works (and reworks) all in-between.
Polish Club came for a good time – with horns. And again, ‘cos why the f**k not?’