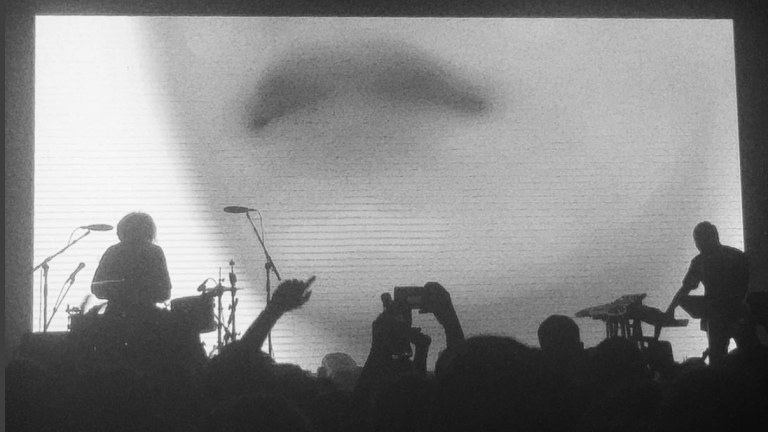 Sophistication and serious beats joined forces at The Forum on Saturday 16th of June. Off the back of their latest release, Hi Viz, The Presets, along with Kult Kyss and Roland Tings, provided four hours of reinvigorating pulsations.

Kult Kyss were first to bring their intergalactic edge to the stage. Complete with LED alien masks, the electronic-pop duo primed the audience for the night to come, encouraging them to bust out a few dance moves to prepare for the workout to come. Roland Tings brought with him infectious beats that had you grooving without even realising.
Both support acts encompassed different elements of the electronic sound. Kult Kyss’s colourful and quirky stage presence can be likened to the eccentric approach of The Presets in creating their anthems. Roland Tings encompassed the foundations of The Presets tunes with strong beats that are easy to listen to regardless of the hour.
Both a perfect choice to season the audience before they marinated in a deep deep pool of house goodness.

A brief pause and DJ set allowed those to hydrate and stretch in preparation for the set to come. The mature skew in the age of the audience was a pleasant surprise- after all, EDM is not just for those able to bear clubs at 3am on a Thursday night, but also for those who just need a colourful escape from the beigeness of adult life.

The Presets wasted no time, springing straight into the nostalgic classic ‘Talk Like That’. Without a single prompt, the audience united to repeatedly scream ‘UH OH’. The EDM immersion was well and truly underway, with audience members using the space around them to put the dance moves they practiced earlier into action. The crowd’s chorus continued through ‘Martini’ and echoed along with the iconic vocals in ‘Ghosts’. Limbs and slightly off-key vocals bounced throughout the crowd.

The 2-piece continued to trail back and forth through their discography, with a large number of tunes tracing back to their debut, Apocolypso. The audience followed from track to track enthusiastically, singing along to the beat when there were no lyrics to join together in.

Kim Moyes, the duo’s producer and drum god, was dressed in mechanic’s overalls and a red-bob wig. Strangely, his look had me on edge. I kept anticipating that things would go a little south, with the performance turning into a weird millennial music themed horror film. Thankfully, the only weapon was his fire dance moves that kept egging on the heavily enthusiastic crowd to out-dance him.

Just when the lactic acid began to invade the thighs, the iconic beat of ‘My People’ began, and a whole new level of energy was unlocked. Looking around, it was evident that despite the very distinct mix of ages- millennial and middle aged, The Presets had united the people, my people. For those four and a half minutes, the crowd were transported back to 2009, in the wee hours of the morning during a festival DJ set. Exhaustion, enthusiasm and nostalgia, intertwined.
The duo wrapped up their set with the first single of the latest record, ‘14U + 14ME’, returning to to perform ‘Anywhere’ as an encore, letting the song’s vibrations energise the audience for their trip home.

Whilst there was a missed opportunity for a trade/high vis theme for the crowd, The Presets provided their fans with the perfect outlet to put the ‘Tools Down’ and escape into a world of heavy beats and repetitive vocals.