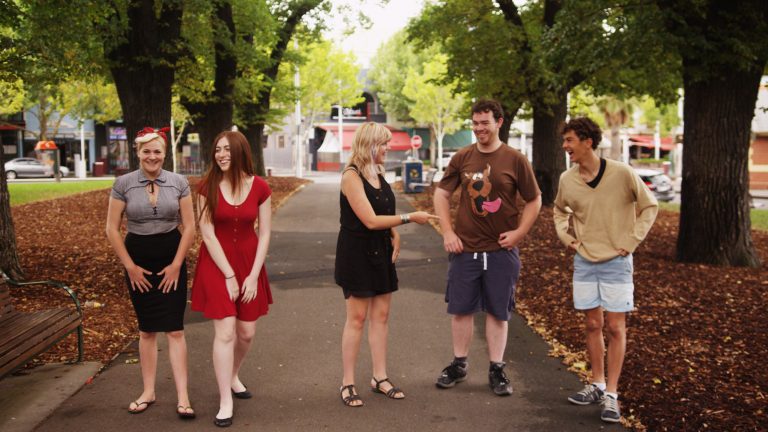 Our five Young Media Leaders will each be coordinating a group of volunteers to produce SYN content in their town and they’re all pretty inspiring people!

Jack Long (Byron Bay): Jack is 16 and has been a member of the Byron Shire Youth Council for two years. Earlier this year Jack applied for and successfully received a $900 grant to create an intergenerational music appreciation society called ‘Music We Love’. The aim of the program is to connect young people and senior citizens through music with a listening event in the Mullumbimby area. Jack also completed work experience at Bay FM and is currently working on his own online radio service called ‘Mullum Underground’.

Yen Eriksen (Canberra): Yen is 22 and has been volunteering at 2XX FM since 2012, taking on a variety of roles. Yen is a radio broadcasting trainer at 2XX and founder and presenter of radio show Friday Night Lip Service, having previously presented The Morning After, Sunday Night Jazz, along with Hey Grrl Hey on Woroni Student Radio. Yen also founded Canberra’s Varsity Roller Derby League and is on the ACT Government’s Community Advisory Council for LGBTIQ. Yen has a Bachelor of Arts from ANU, with majors in Gender, Sexuality and Culture, and Chinese Language studies.

Sam Maloney (Warrnambool): Sam is 20 and has recently completed an Introduction to Radio course at Melbourne Radio School, commuting 3 hours each way to attend evening classes each week. Sam has previously been involved at 3WAY FM presenting a show while in high school, and was a character costume performer for the Warrnambool Fun 4 Kids Festival three years in a row. Sam works full-time at Bunnings in a role that developed from casual after school employment, during which he has been team member of the week four times.
Honni Cox (Hobart): Honni is 22 and is currently the Training Coordinator and Programming Assistant at Edge Radio, through which she has conducted the School of Rock Training for 14-18 year olds and the Humanitarian Migrant Radio Skills Participation Project. Honni has been a radio presenter and producer at Edge Radio in a voluntary capacity since 2007 and is certified as a Pathways trainer by the Community Media Training Organisation. Honni has previously been the Volunteer Coordinator and Convenor for the Anime Island Convention, Tasmania’s largest pop culture event.

Bianca Gawith (Gippsland): Bianca is 17 years old and has been volunteering with Gippsland FM since 2012. Bianca is a presenter on the youth program Be Heard, a weekly radio show supported by the Victorian Government. Through this program, Bianca has also assisted in the launch of a Be Heard CD, and has previously assisted in coordinating the Leongatha Raw Vibes music festival with the South Gippsland Shire Council FReeZA committee. Bianca is entering year 12 in 2014 as College Captain of her school.