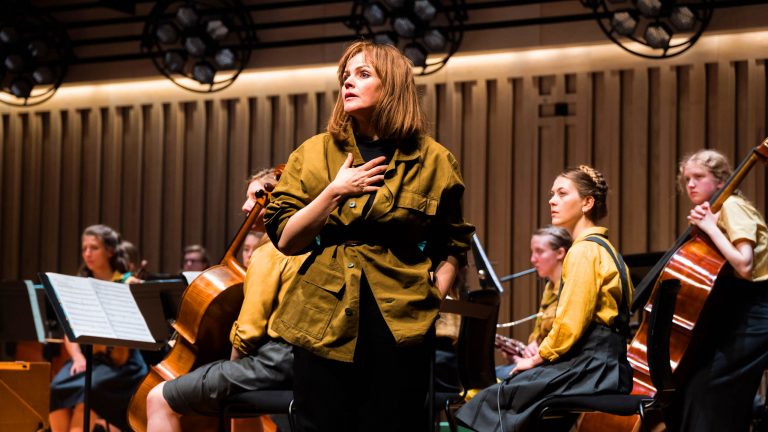 Sarah Frankcom’s The Nico Project, currently playing at the Melbourne International Arts Festival, is not what you’d expect from a traditional biographical play, but rather, extends itself into a rumination of dissonant dialogue woven through Nico’s music to create a challenging piece of experimental performance art.

German-born Christa Päffgen, known by her stage name Nico, is perhaps most recognized for her collaboration with proto-punk, art rock group The Velvet Underground, and her time as a protégé of artist, Andy Warhol. Subsequent solo albums in the ‘60s, ‘70s, and ‘80s, exploring a range of genres from folk to avant-garde to proto-goth influenced a myriad of contemporary alternative musicians, even beyond her death in 1988. Despite astonishing talent in creating experimental moods and what seemingly appears as a story of an unsung female hero, Nico was far from admirable, and a product of her time growing up in Nazi Germany.

The all-female creative team of The Nico Project, including 15 female musicians from Australia and the UK, and lead actress and musician, Maxine Peake, set the tone for the show, exploring bigger questions of what it means to be a female artist. Peake switches between her regular British accent and Nico’s famous deep German accent throughout the show although it appears no concrete reason as to why is given – perhaps the ghost of Nico had possessed her, perhaps it was a look into the disheveled mind of Nico as she created her 1968 album, ‘The Marble Index’ (of which the show was inspired by), or maybe a glimpse into a fever dream.

‘The Marble Index’ remains one of the most critically acclaimed albums in history, marking a point where Nico abandoned her soft folk music for a more avant-garde, doom-and-gloom sound which is said to have been the first gothic album. Her use of the harmonium as a lead instrument was also noteworthy, and in The Nico Project, Peake’s moments behind the harmonium are the highlights of the show, creating a tense yet ethereal atmosphere. The disorientation of Peake’s monologues – aimed at herself, the audience, or the universe – at times felt repetitive, and stronger moments existed within the music of the play.

Those expecting a traditional storyline may not enjoy what The Nico Project has to offer, but given the show’s minimal marketing techniques, it’s difficult to merely develop expectations before entering the theatre. This is to the credit of all the artists involved with the show, who clearly understand that experimental theatre is for a niche audience, not unlike Nico’s ‘The Marble Index’.

Granted, if The Nico Project were to attempt to tell a traditional story of Nico’s life, it would likely prove a difficult task; stories spread about her throughout the years tend to contradict each other, classifying her as a mystical individual. What was well known, however, was her problematic and racist politics. In good taste, The Nico Project therefore does not glorify her, even hinting these attitudes in its use of costume; the female orchestra behind her dressed in matching uniforms that evoke the youth of Nazi Germany.

However, looking at The Nico Project through the lens of a play solely about Nico may be misleading, it perhaps more so being an investigation of the ethos of female artistry in general, merely using Nico as a starting off point for a woman whose discography inspired and influenced the artists of the present and of the future.