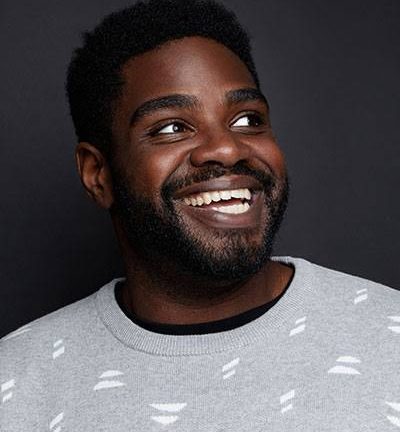 With writing credits for The Kroll Show and appearances on TV favourites like New Girl, Drunk History and Bob’s Burgers, Ron Funches is undeniably funny.

Gaining some anti-establishment cred early this year for turning down Netflix, Funches is no stranger to the scene and trusts his own taste as to what counts as comedy.

Funches starred on Undateable (2014 – 2016) alongside Chris D’Elia and Brent Morin, which although only airing for four seasons, built a cult following over its final season of which all episodes were broadcast live. A rare style in our streaming generation that earned admiration from audience and comedy peers alike. Watching just one scene featuring Funches as character Shelly will give a sense of the style and pace he takes into his stand up.

A laid-back stage presence Funches makes it clear from the outset he is in control of the tempo of the show. He’s not afraid to let the audience know he’s watching us too, lightly teasing for not appreciating the support act enough or feigning judgement at which jokes have prompted a larger laugh. There are few comedians who can control a crowd like Ron Funches.

Funches’ comedy is gentle in tone and in content. His humour isn’t quite dry, nor dirty and the most common disruption to the set is his own cheerful and unmistakable giggle. From his Mum moving into his pool house, reality TV or playing video games, Funches turns mundane activities or events into engaging content for his audience.

His stage manner gives a sense that you’re seeing an authentic part of his personality when he is up there, although there’s a limited vulnerability to his show. Even the more personal parts about his family and body weight are guarded.

Although access to Funches will nothing but increase with his latest special Giggle Fit on Comedy Central and a potential Netflix horizon, there is no substitute for seeing him live. Self-aware and undoubtedly present, Funches takes great pleasure in bantering with the crowd and enjoys how the interaction could take him off track.

You can catch Ron Funches Live for his first time in Australia until Saturday 20 April at The Comic’s Lounge in North Melbourne as a part of the 2019 Melbourne International Comedy Festival.