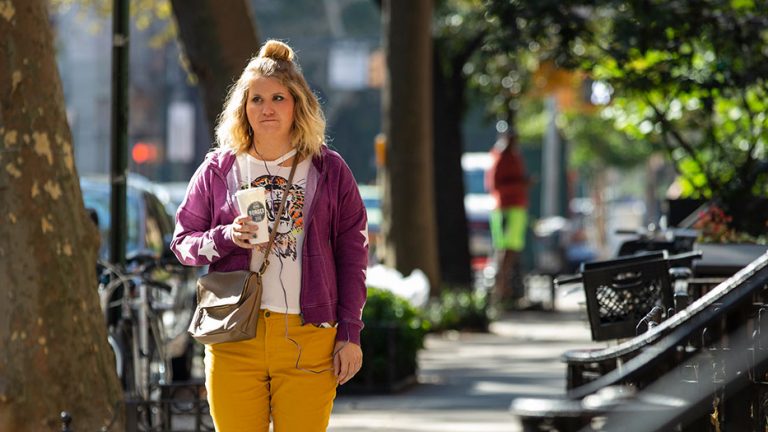 What do you think of when you hear the word: weight? You probably start to think about your own. It is something very personal to us and when we talk about it, language is everything. On the surface, Brittany Runs a Marathon might sound superficial and problematic, but it instead packs a surprisingly emotional and deep message without losing its humour.

Brittany Forgler parties hard but her late-night plans are about to be put on hold. After visiting a doctor, concerned about her health, she puts on her runners to try and lose some weight. While on her fitness journey, Brittany is forced to come to terms with her insecurities and challenged perception of weight as she prepares for the New York City marathon.

Jillian Bell is brilliant in her first leading role. While that may not be obvious at the start, she slowly wins the audience over through her unique style of comedy and makes Brittany an easy character to root for. She stars alongside Michaela Watkins, Micah Stock and Utkarsh Ambudkar who are all excellent in their supporting roles. Lil Rel Howery is a particular standout with an unfortunately small amount of screen time.

Paul Downs Colaizzo has accomplished an incredibly difficult feat: differentiating happiness with the need to be skinny. As the writer and director, he has used this true story to craft an intelligent and measured response that is about more than weight. Brittany is unhappy not because of her size but her lack of direction. It becomes apparent the film is more interested in Brittany trying to find happiness, not lose weight. From this, the audience can effortlessly see themselves within Brittany and her inability to separate self-esteem and physical appearance.

There is nothing particularly spectacular about the film technically. Downs Colaizzo keeps it simple and structured only employing an animation sequence at the end which adds little to the film. A disappointing error occurs in the editing. Continuity is so important in creating a seamless viewing experience for the audience. So, when Brittany finishes her glass of wine in one shot and then in the next it is filled, the immersion is broken.

Obese is not a word people like to hear. So much so, doctors are told to refrain from using it when speaking to patients. It is hard to talk about weight because everyone feels differently about it. While the film is formulaic it is nevertheless an inspirational tearjerker. Brittany Runs a Marathon goes the distance to tackle the delicate subject of weight with care and – by finding the comedy in it – easily crosses the finish line.