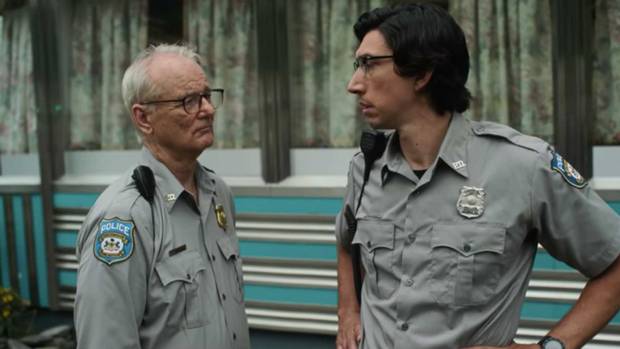 “The Dead Don’t Die” is one of the headliners of the 2019 Melbourne International Film Festival. Written and directed by American auteur Jim Jarmusch. “The Dead Don’t Die” has created a lot of hype since its announcement in March this year. Partly because it’s Jarmusch’s first time taking on a zombie film. Paired with his unique character and casting choices, such as pairing Bill Murray, Adam Driver, and Chloe Sevigny together as small-town cops. Along with Jarmusch regulars, Tilda Swinton playing a Scottish ninja and Tom Waits playing a hermit with appearances from Selena Gomez, RZA and Iggy Pop as well.

Jarmusch is well known for his deadpan style. So the concept of a zombie film written and directed by Jarmusch, along with the cast involved seems like a great pairing. And for the brief moments where the zombies pull themselves out of their graves under a dark blue moon, it was incredible and terrifying. It’s one of the most well-composed and visually visceral sequences that I’ve ever seen in a zombie film. The other fantastic part of this film follows a group of young teens stuck in a correctional facility. Their performances felt so real and genuine and when the zombies invaded their correctional facility I felt my heart racing. However, their moments on screen were so brief and few and far between, with Jarmusch focusing more on other story arcs, which is super unfortunate as their story could have been a whole film within itself. As everything else other than these moments fell very flat.

Jarmusch has always used unique cast pairings in almost all his films. He has a knack for getting a shrewd acting performance out of people that don’t usually act and pairings that don’t usually happen, while also retaining his signature style. So it was quite disappointing to see that many of the actors in this film felt underutilized. This is really highlighted by Jarmusch’s writing, deadpan humour and the overall story arc, which in lieu of creating something new ers to the more run of the mill zombie stories. Many of the character plots go nowhere, simply by being poorly developed than just killed off. A lot of the dialogue was super stilted, paired with Jarmusch’s decision to use repetitious cringeworthy meta-humor throughout the entire film. Such as referencing the name of the film and the song it was based on multiple times to Bill Murray and Adam Driver talking about reading the script and mentioning Jarmusch by name. This type of writing, along with the deadpan sensibilities, in this case, felt straight-up dull and boring.

I really thought “The Dead Don’t Die” was going to be something special, like almost all the other Jarmusch films I’ve seen. However, it felt like Jarmusch just wanted these acting pairings and chose to write surface level roles to fit the actors. It really felt like he has made the first dead zombie film as none of it has any soul or passion to it. Overall, the only thing I got from “The Dead Don’t Die” was just an old man that seems either bored of making films or just genuinely out of ideas and chose to turn what could have been a very unique experience into complaining about how coffee and our phones are metaphorically making us zombies, and fitting the worst adaption of deadpan and meta-humour that I have ever seen.