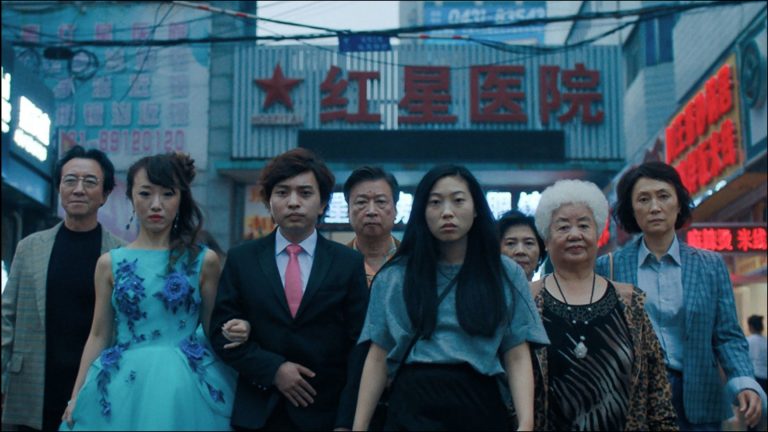 “Chinese people have a saying: When people get cancer, they die”

Lies, secrets, fabrications, scams, deceits and falsehoods. No matter which is used, they all represent the same idea: truthful information is being kept from someone deliberately. The question of whether that is fair is another story. The semi-autobiographic The Farewell has more going for it than being based on an actual lie. It accomplishes a feat by expertly using comedy and drama to showcase differing cultures and societal beliefs.

Billi left China at the age of six and went with her family to America. 24 years later, after being rejected from the Guggenheim Fellowship, she finds out her Nai Nai has been diagnosed with terminal cancer. Billie and her extended family all return to China but decide not to tell their grandmother about the diagnosis. Instead, they stage a wedding to say one last goodbye.

Praise must go to Anne Kang and Leslie Woo for putting together this incredible cast. Awkwafina has no problem taking up her first leading role proving she is more than capable of handling drama. Tzi Ma and Diana Lin are fantastic as her parents. However, everyone places second when standing next to Zhao Shuzhen who is beyond phenomenal as Nai Nai.

For those unaware, it is incredibly difficult to make an American-Chinese film. Either side wants their self-interests and ideologies reflected in the final product. The Farewell has lots to say about both countries especially in regard to American opportunism and Chinese wealth. However, director Lulu Wang bridges these worlds rather than pit them against one another. She is far more interested in looking at family dynamics, identity and the effect diaspora and opposing cultures have on a person. While this is may sound like too much to tackle, she makes it easily comprehendible. Wang does not shy away from these more controversial topics which makes the film far more captivating.

The future is bright for Lulu Wang. Do not be surprised in January when she is nominated for Best Director at the Academy Awards. Awkwafina may be drawing people in to see the movie but Wang is the one who leaves them in tears. Her writing is naturalistic and effortlessly brilliant. Regardless of their on-screen time, all characters are distinct and unique. Doused in greys and dark blues, cinematographer Anna Franquesa Solano and Wang still manage to find the light in Changchun with every frame so perfect they could be exhibited in a museum.

Nothing in this film is by chance. Lulu Wang has crafted an exceptional story that explores more than just a lie. This thought-provoking film will keep you occupied for longer than the perfect 98-minute run-time. Not every question in the film receives an answer. Instead, you must look to your own beliefs, identity and culture to try and find them. So even when the credits start rolling, you won’t want to say goodbye to The Farewell.