Movie Review: Dora and the Lost City of Gold 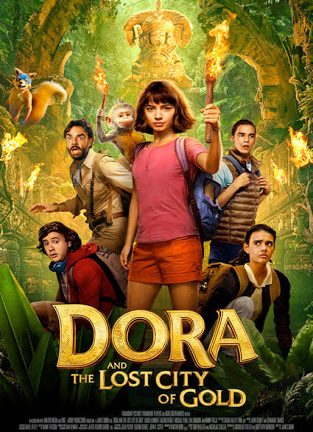 “Show us the correct path, Explorer”

Chances are you have not watched Dora the Explorer in quite some time and are pretty content with that. So, unless you have younger siblings, the likelihood of you seeing her new movie is low which is a real shame. For Dora and the Lost City of Gold is perfect for the kids still watching her, those who grew up with her and the adults forced to sit through every single episode.

After years in the jungle, Dora goes to the big city where she is confronted with the most unpredictable animals in the world – teenagers. Before she can begin to understand the intricacies of navigating high school, Dora is thrust back into the jungle – this time with a group of her peers – to save her parents and find a mysterious Incan city.

Isabella Moner flawlessly emulates the boundless optimism and compassion of Dora. She really is the heart of the film and does not disappoint. Eva Longoria and Michael Peña as her parents are fantastic and give great context as to why Dora acts the way she does. There is good chemistry between the group of teenagers especially Madeleine Madden and Nicholas Coombe who constantly take the spotlight.

Nothing in this film should work. It contradicts itself constantly and mixes factual logic with cartoon logic. However, it really does not matter as the writing is spot-on. All the characters are distinctively unique with interesting traits. Self-awareness is key and writers Nicholas Stoller and Matthew Robinson clearly knew that. It translates wonderfully to older audience members who can recognise the comedy in it. Above all, much like an episode of Dora the Explorer, the most important part is the lesson learnt at the end and the film is no different. It reinforces the obvious messages of kindness while also touching on the importance of cultural acceptance and understanding and does it exceptionally well.

At times, the CGI falls short. Boots and Swiper are both animated as if their cartoon counterparts were real. It is not the greatest, but it could certainly be a lot worse. Unfortunately, there is an animated sequence where everything transforms into the cartoon. It is so well done; why they did not lean into this and make Boots and Swiper more cartoonish is a mystery. That being said, Boots makes more sense as the film goes on, however Swiper is completely out of place. While kids may enjoy his presence, it feels forced and poorly thought-out.

Ultimately, it is what you make of it. That is true for all films but rings especially true for this one. If you think it is cringy, it will be cringy. If you think it is brilliant, then it will be brilliant. Coming from an old-time viewer, Dora and the Lost City of Gold is lots of fun for all ages. Can you say: surprisingly hilarious and self-aware with an unexpectedly beautiful message? ¡Muy bien!