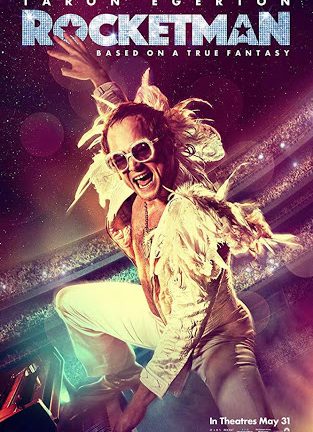 Is it the outrageous outfits, stunning soundtrack or momentous message that makes this film so special? Musical biopic Rocketman showcases the journey of Reginald Dwight into the enigmatic Elton John with an abundance of style, energy and magic.

The story unravels as Elton John is admitted to rehab and recounts his life from childhood innocence to worldwide stardom. He does not hold back, speaking on his many addictions and problematic relationships. During this time, he must also come to terms with his own insecurities about the man he left behind to become Elton John. All this is explored throughs his greatest hits.

Across the board, performances are vibrant, energetic and extremely convincing. Taron Egerton, well-known for his role in the Kingsmen franchise, does an amazing job at impersonating the singer and is the obvious standout. Jamie Bell plays long-time collaborator Bernie Taupin and Game of Throne’s Richard Madden plays his unloving manager John Reid. While the film is commanded by Egerton, Bryce Dallas Howard and Matthew Illesley – who play John’s mother and young Dwight respectively – put on striking performances.

Do not be mistaken, Rocketman is a true musical. Characters breakout into songs often and only occasionally are songs introduced before sung. Egerton does not lip-sync, opting for his own lovely vocals which allows him to separate his vision of Elton John from John himself. It is impossible to find fault with the music as he has such a fabulous catalogue. While it is a shame they only focus on his greatest hits, there is really no need to look at his obscure B-sides.

The film has no interest in being ordinary, much like the man himself. It begins with John walking into the rehab centre in an orange jumpsuit with sequenced devil horns. This perfectly establishes the fantastical tone and allows for more absurdities to play out during Rocketman. It is as if while recounting his life story, John imagines the events with more magic and drama where the facts get blurry. While this will turn some people off, it is a risk director Dexter Fletcher has made and one that ultimately pays off in the feelings the film elicits. To top all this off, the costumes are well-crafted, historically accurate and fitting for one of the most flamboyant musicians in history. They show how much John has changed from Reginald Dwight and how far he still wants to go to get away from that version of himself.

The real Elton John serves as an executive producer on the film which concerned me. Here he gets the final say on people he disliked which could either be fair judgements or cruelly intended. Yet the unrelenting and uncensored view of his personal struggles and darkest moments make me believe John wanted this film to be true to who he is. Rocketman takes us on an out-of-this-world adventure through the difficulties of navigating fame and perfectly sticks the landing.