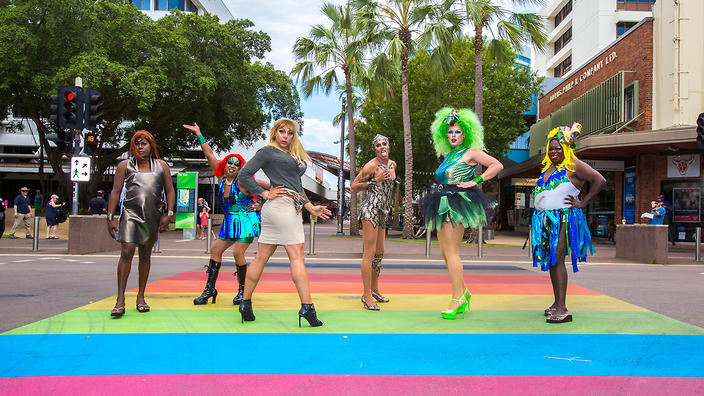 Black Divaz, directed by Adrian Russel Wills, documents the inaugural Miss First Nations Drag Pageant, bringing some of the fiercest Aboriginal and Torres Strait Islander Drag Queens from across the First Nations to Darwin (Larakia Land). We are introduced to contestants Crystal Love, Isla Fuk Yah, Jojo, Josie Baker and Shaniqua; alongside hosts Marzi Panne and Miss Ellaneous. The doco goes deeper than glitz and glamour, giving us an insight into these queen’s personal lives and motivations, with the struggle of being a minority within a minority being as a recurring theme in all their stories.

The Miss First Nations Drag Pageant is the plot focal point, Black Divaz documents the very first time the pageant was held in 2017. Darwin is a super interesting setting for a queer doco, while the film has time in each queen’s respective home towns, a lot of interviews take place in hotel rooms while beaches and markets serve as aesthetic overlay. This gives you a very strong idea of the weight of the pageant and what has gone into planning and competing in respectively.

If you don’t already adore the queens as soon as you are introduced to them, you will absolutely grow to love them as their stories are individually explored throughout the film. All the queens slay with their own unique versions of femininity, glamour and blak power, from Crystal Love being her authentic sistergirl self to the hyper-glam home-girl Isla Fuk Yah, everyone in this documentary gets a time to shine; literally and figuratively.

On a technical level the film shows off some fun editing and colours, but without a doubt the soundtrack is definitely one of the stronger elements of the film. Black Divaz celebrates black members of the queer community on and off screen, featuring music from local acts such as Electric Fields, from the Anangu Pitantjatjara Yankunytjatjara lands, to international queer excellence such as US rapper, poet and performance artist Mykki Blanco. Electric Field’s dream pop sound works so well in uplifting scenes, making for some of the most memorable moments in the film.

Black Divaz is a very fun watch, it documents a young but very important Australian drag pageant, that will potentially become legendary in years to come. If you like drag queens in any facet and want an introduction to some of the First Nation’s finest, you really wouldn’t want to miss this one.