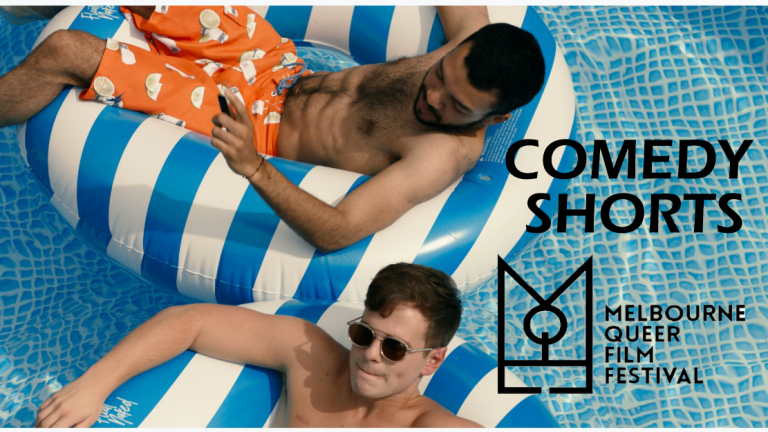 On their opening night, the Comedy Shorts at this year’s MQFF packed a punch. Riddled with satire and Queer inuendos, these shorts proved one thing – Queer people are funny as hell. The eight shorts explore the complexities of queerness from coming out, intersectionality and hook-up culture in ways that are nothing short of comedic genius. The opening Spanish short Polter explores the story of a man’s coming-out journey in which queerness is represented as a poltergeist and his only safety net is a demon hotline. This quirky yet effective take on coming out is directly contrasted with 2 Dollars. It tells the story of Sid and their journey of non-binary acceptance in their ‘racist homophobic hellhole’ of a workplace. We then see varying perspectives through the sublime story of later stage queer acceptance in Flex and the nostalgia ridden The Gaybysitters Club which rewrites the classic story of The Babysitters Club without all the queerbaiting and with all the happily ever afters.

All jokes aside, the shorts were fantastic through the way in which they intertwined humour with pressing matters within the LGBTQ+ community. The balance between humour, satire and social commentary was immaculately crafted throughout every single film. When a lesbian couple trying to adopt in The Test and a gay man tackles the loneliness of gay hook-up culture in The Dick Appointment, these shorts tackle hardships in nuanced ways.

One film which implemented this balance particularly well was Spanish film Your Lucky Day. With a somewhat perverse undertone, a man is advanced upon by a stranger within an elevator. The sheer absurdity of their encounter is in full force, spinning comedy gold out of a typically underwhelming scenario of everyday life. Yet, this films twist intelligently shows the internalised repression of queerness within and outside of the community. This jarring juxtaposition between humour and commentary represents a larger thread throughout the shorts which is explored separately within each individual film. It is clear that these filmmakers are using their experiences as inspiration making the films ingeniously hilarious and uniquely poignant.

A notable standout was the short’s closing film Query which had me begging for it to be made into a feature film! Following a progressive, long-standing discussion about male sexuality and desire, two roommates put their theories to the test with a kiss that lingers just a little too long. This short had the audience in the palm of their hand with sexual tension so thick you could cut it with a knife. This tension was intercut with pure moments of vulnerability between the two. This closing film finished the night on a hopeful yet blisteringly painful anticipation for what would become of these two roommates – a perfect curation from the MQFF directors.

The MQFF Comedy Shorts are not one to miss. In a time of global gloom treat yourself to a dose of laughter that will leave your heart full and your belly aching. Fluttering with wholesome conclusions and cunning punchlines, these shorts cement once and for all that QUEER PEOPLE ARE FUNNY. They are the right way to spend your evening.

Comedy Shorts is playing at Melbourne Queer Film Festival Together on 18 March. You can catch other LGBTQ+ films during the festival which runs from the 11-21 March