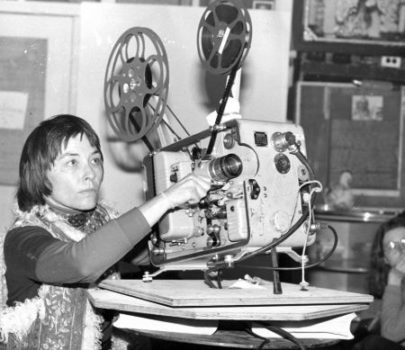 The documentary ‘Dykes, Camera Action’ Directed by Caroline Baker is about the history of lesbian cinema and representation in film. It tells a story of the history of queer cinema and the thinking behind the movies made. Featuring in it are multiple queer women who have directed lesbian films and share their stories and experiences during the 1960s to the early 2000’s in America and its effect on modern day cinema and queer representation. Some of those who feature in the documentary are Rose Troche (director of The L Word), Barbra Hammer (a pioneer in queer cinema), Cheryl Dunye (film director), B. Sarah Shulman (novelist, playwright and lesbian activist) and many others.
The documentary was interesting and enjoyable to watch and had lots of stories about how a movie was created, how queer cinema started, the importance of lesbian relationships being shown in the films and that are being told by Women. The cast spoke a lot a lot the importance of identity and how it was important to show in the films and could relate it back to their lives. It taught things about the history and approached topics well and didn’t focus too much on one thing and was easy to understand what they were talking about. Dykes, Camera Action is about lesbian cinema but it also focused on social issues such as the fight for equality, queer activism and also on women of colour being seen in the films and how it helped them with their identity and to be more diverse.

This documentary featured many scenes from various movies to go with what was being talked about to help better tell the story and give the viewer a visual of to show how the characters were portrayed. As well as that it also had clips of protest for equality and the women’s movement and how it can relate to real issues that they fought during the ‘60s and how that had an impact on the sort of films being made.
Overall Dykes, Camera Action is defiantly worth the watch. It is full of facts and personal stories that maybe a viewer could relate to. It tells a story of queer history and lesbian cinema while also entertaining the viewer. This isrecommend to any one interested in Films and lgbti history.
Showing times for The Melbourne Queer Film Festival