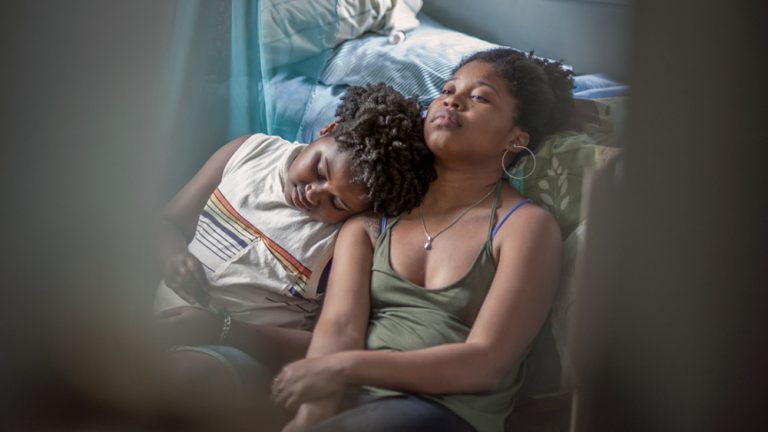 In her feature directorial debut, Jordana Spiro, an actress best known for her performance in Netflix’s Ozark, weaves together a poignant and naturalistic coming-of-age portrait of love, loss, and womanhood.

Night Comes On follows Angel, played by the perfectly restrained Dominique Fishback, whom upon release from jail, attempts to seek revenge on her father for the death of her mother. Angel’s younger sister, Abby, played by incredibly mature newcomer, Tatum Marilyn Hall, goes along for the ride, sparking perhaps one of the most realistic sibling dynamics ever played out on the big screen.

Spiro and her co-writer, Angelica Nwandu achieve a truly rare quality in filmmaking: a script that feels true to these characters and their environment. This is also a credit to Fishback and Hall, who deliver their dialogue with such genuine sentiment and understanding of the film’s layers.

While on its surface, Night Comes On appears to be a film about revenge and sisterhood; it also paints a heartbreaking and important image of the effects of grief and childhood trauma.

Hatuey Viveros Lavielle’s cinematography expertly depicts the city of Philadelphia, its multicultural atmosphere, and the wealth inequality plaguing the streets. With a neutral colour palette throughout, and contrasting light blues, reflecting the ongoing motif of the ocean throughout the film, the depiction of Angel and Abby’s unprivileged lives are heartbreaking enough to shed a tear.

A slightly clichéd climax is not enough to ruin the mood of the remainder of the film, which retains the spirit of its diverse cast and creative team. The message of the strength of sisterhood, in both literal terms of kinship, and merely the sisterhood women formed with women outside of our biological families, is clear throughout as the overarching theme.

Spiro had discussed her difficulty in funding Night Comes On in interviews and Q&As, expressing the lack of interest in stories about women, and particularly, in this case, a story about a queer woman of colour. However, the film’s premiere at the 2018 Sundance film festival marked a record for the festival, which for the first time contained 37% female directors. One can only hope with this progress, we will see more beautifully crafted films about the less represented members of society presented in the mainstream. In the meantime, Australia is lucky to have outlets like the Melbourne Queer Film Festival to represent great diversity and continue screening these touching films.

Night Comes On will be screening as part of the Melbourne Queer Film Festival (MQFF) on Saturday 16th March at 3:00pm at Cinema Nova, and on Monday 18th March at 8:15pm at ACMI Cinema 1