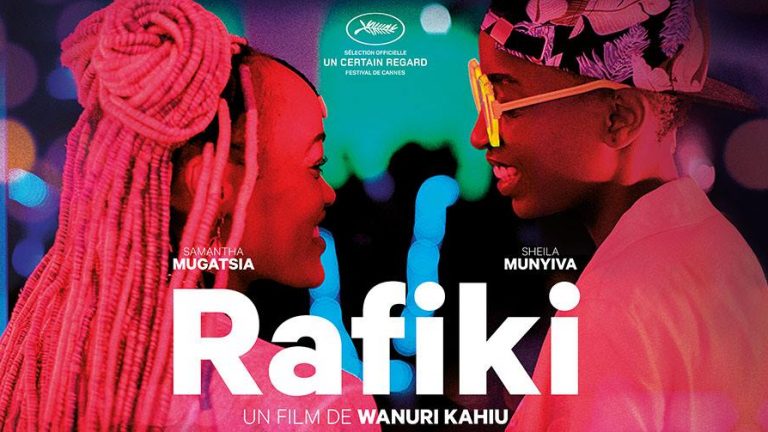 Developed nations have become accustomed to movies about the queer experience, readily producing and consuming them in recent years; yet in other parts of the world, where homosexuality is a taboo, stories like these are few and far between, making this film a milestone in World Cinema.

In an impoverished suburb of Nairobi known as “the Slopes” resides Kena (Samantha Mugatsia), the teenage daughter of shopkeeper John (Jimmi Gathu) and housewife Mercy (Nini Wacera), both of whom are divorced. As she patiently awaits her university entrance results, Kena hangs out with her male friend Blacksta (Neville Misati) and occasionally manages her Dad’s store, whilst he runs for parliament against incumbent politician Peter Okemi (Dennis Musyoka).

Kena looks to be leading a very mundane life, until she has a chance encounter with Okemi’s daughter Ziki (Sheila Mungira), a fellow teenager with long, colourful braids and an energetic personality. The two girls are immediately drawn to each other and become friends not long after, garnering the attention of everybody in the Slopes. As they spend more time together, Ziki expresses her desire for she and Kena to become closer, a move that would be fraught with danger.

Although it’s yet to receive a release here in Australia, many readers may already be familiar with Rafiki, which is directed by Kenyan film-maker Wanuri Kahiu. Her feature made its debut at last year’s Cannes Film Festival, where it gained plenty of international attention, and did so again four months later, when Kenya’s government banned public screenings of the picture. Said ban was lifted not long after, allowing Rafiki to be eligible for a Foreign-Language nomination at the Oscars, but it unfortunately failed to make the shortlist.

The most impressive element of Rafiki is how it handles the lesbian romance between Kena and Ziki. There are no gratuitous, explicit sex scenes here a la Blue is the Warmest Colour; instead, their relationship is treated gently and delicately, akin to the Barry Jenkins film Moonlight. What’s presented in the story is not a pair of teenagers who forcefully lust after each other, as per the industry norm, but two unlikely friends who slowly form a close bond, which is refreshing to see.

In addition to the comparisons above, Rafiki draws allusions with another tale about young romance, that being Romeo and Juliet – note how Kena and Ziki are the daughters of families in positions of power, or aspiring politicians in this instance. Disappointingly, while the political ambitions of both John and Okemi are acknowledged, the story doesn’t thoroughly explore what motivates them to run for office, or how the relationship between Kena and Ziki affects their campaigns, robbing audiences of an intriguing conflict.

Despite being a low-budget film from Kenya, Rafiki also has the distinction of having a very professional look to it. The glum landscapes of the Slopes are made vibrant by the bright fashions of the characters, especially the clothes of the two leads; the cinematography is clean and sharp, even in tight and intimate spaces; and the great pop soundtrack makes proceedings more upbeat. This praise, regrettably, doesn’t extend to the jarring, distracting editing that disrupts the movie’s flow.

Rafiki is already a landmark achievement in African and queer cinema, but Wanuri Kahiu’s film is made all the more special by a graceful tone and colourful visuals. With these two qualities, the film is bound to find a wider audience, a reward it unquestionably deserves.

Rafiki will be screening as part of the Melbourne Queer Film Festival from March 14th. For more information on the event, head to mqff.com.au