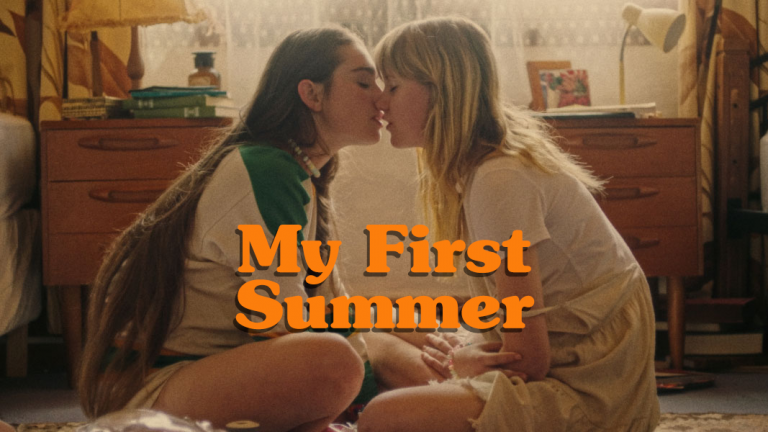 In a world where a purple promise (much like a pinky promise, only on your index finger) is a blood pact, My First Summer marks itself as an Australian queer classic for the ages. Set in rural Australia, the film encapsulates the naivety and hope of young queer love, brought to fruition at this year’s Melbourne Queer Film Festival.

The film follows Claudia, a wanderer confined to the rigidity of country life, who fills her spare time by travelling as far as her bike will take her. One night, she witnesses the harrowing drowning of Veronica Fox, a notable yet local author, and in the corner of her eye she can just make out a young woman running away from the scene. Upon later revisiting the crime scene, she creeps into Veronica’s nearby home to find Grace, her sixteen year old daughter left to fend for herself in the wreckage of her mother’s death. As both girls look for escape and comfort with each other, their at first awkward interactions bloom into wholesome portrayals of sweltering teenage love, built on hesitation and suffocating desire.

Filtered through natural sunlight and the Australian outback, this film has a modern, Australian female gaze. This female-lead narrative depicts female sexuality and feminine desire in nuanced ways unlike any other through the way in which director Katie Found includes the awkward, messy components of adolescence. From small glances of excitable nerves and sexual tension between the girls, Found captures the delicate stage of queer relationships as they navigate their mutual attraction to each other. Undressing is met with blushing stares to the ground and hands are met with the quick gasps only just audible, mimicking the subtleties of real life. Sexuality isn’t demanded or required, it’s fostered under the circumstances in which these two blaringly different women find each other, allowing to escape from the worlds that confine them.

My First Summer is a breath of fresh air within Australian Queer cinema. It is a refreshing glass of lemonade on a warm summers day as their sexuality as women isn’t fetishized or dismissed. Found’s exploration of young queer love is so uniquely authentic. Made with such a blaring attention to detail, she fosters their relationship so organically without the slightest evidence of force or reluctance. The physical beauty of this film only mirrors the emotional warmth that emits from each frame as it genuinely feels like watching two women fall in love over the summer – a sign that as Found’s first feature film, she is one to watch.

My First Summer is playing at Melbourne Queer Film Festival Together on 13 March. You can catch other LGBTQ+ films during the festival which runs from the 11-21 March